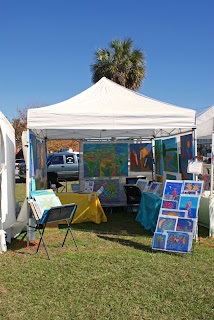 I'd like to tell you that the weekend sales were outstanding and that my last festival of the year was an amazing success. If I did I'd be lying. Instead I had my worst show of the year excluding Holden Beach. I didn't even make my booth fee.

There were two major factors that contributed to the low turnout this past weekend. The present economic conditions obviously kept many wallets from seeing the light of day but another low blow came from Savannah's Telfair Museum moving their annual art festival from the first weekend of November to the second. And even though the weather cooperated for the most part (see my photo to the right) Sunday's cold breeze made for a less than perfect shopping experience.

Now the regular readers would probably expect the usual moaning and groaning I usually spew when things don't go so well out of town. I guess I must be still evolving as a person or perhaps a better explanation that my wife would certainly support, Bennie is finally growing up. I'm looking at the glass as half-full these days. No doubt that I would've preferred a better outcome but I brought home some positives that will help me gear up for next year's schedule.

A little secret that I've been keeping for awhile is that I was accompanied to Tybee Island by another local artist. Call it a test run if you will. The two of us made plans back in September at our Art in the Park to travel together for a show so that we could save on expenses, mainly lodging. Traveling with family is pretty easy because we know how the dynamics of our relationships usually work. Traveling with someone else, even a trusted friend, can sometimes end up with a plot that resembles a Chevy Chase movie, particularly when camping in a pop-up camper the size of a small bedroom.

I'm happy to report that everything went splendidly! In fact it honestly felt like I actually had family with me. Although my friend didn't make back all of his expenses he did fare much better than me. We've already started planning next year's schedule to maximize the number of trips we can make together. I can't wait to introduce you to him tomorrow!

One other positive is that a local gallery will be representing our paintings. I already knew the owner was going to carry my work but she was quite impressed with my friend's paintings so she kept about a half dozen of his pieces as well. We both realize that the winter months are slowest on Tybee but having our work in front of potential buyers is much better than it sitting in storage all winter. And since Gayle Bolten of Gallery by the Sea knows about Ben's talents she insisted that I leave some of his prints with her as well.

Even though the show season is over I have plenty of work in front of me. Besides introducing my friend look for the Christmas card images to be revealed sometime tomorrow. I'll have more details then but basically there are four cards and four envelopes in each pack. Each set will sell for $12 (shipping included) and if you purchase 4 sets you get a fifth one free. In case you are interested in an even larger order then e-mail me (benwaddell at bellsouth dot net) so we can discuss an even better discount.

And if you have the notion to give a loved one (I would hope) a nice painting for the holidays I can tell you I have plenty of inventory. As Joan would say give me a reason to stay in the studio during the winter so I don't bother her while she hibernates.

i'm glad things went somewhat better than could have at tybee. and that's great that the gallery will be showing your pieces.

Wow! For a guy who's had a tough couple of weeks, you certainly do sound positive, and you have some serious positives to look forward to! And the ultimate positive of positives? You are doing what you love. It don't get any better than that (unless there's beer ;).

The tapdancer and I want to know what next season's schedule is, so we can plan a road trip.

Glad you are both back safely, that you have made plans to save some $ next season! Can't wait to meet your new partner-in-crime and see this year's Christmas cards...woohooooooo!!

Sorry it didn't go as well as you'd hope, but it sounds like some good definitely came of it anyway!

Hey....You can always move down here to the "dungeon" and come paint with me when Joan Kicks you out.....of course not sure if the fridge will hold all of our "necessities." Or....she can come move down to the dungeon and leave you!!! (of course she would know that Jessie and Ben may have a great time but will never have all the clean clothes, brush their teeth, etc. Hang in there. I still think you and Ben need to do some Christmas ornaments. Let him do some background and paint a palmetto tree on them! I have two more to go two!!! If you can make it to the opening come on!

I'm glad the weather cooperated- even if the checkbooks didn't. I think the traveling with another artist idea is great!