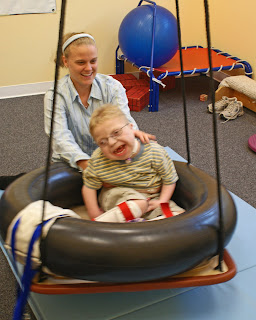 A few days ago Jessie brought home a progress report from school. We were quite pleased as was she that she's currently making straight A's in each of her classes! Ever since she began her school years Joan and I have made it a great effort to not make such a big deal if she doesn't quite reach perfection. For us it's been more important that she enjoys the academic experience and actually learn things rather than feed off the competitive nature that standardized tests have made academia these days. Obviously that philosophy has paid off at least in our household.

The progress that Ben makes at school or in his outpatient therapies isn't as easy to to judge. There are no grades or tests that keep us abreast of potential problems or underachievement. Ben's gains are measured by minute accomplishments like remaining healthy for weeks or even months at a time. They are also measured in smiles, the amount of sweat soaked into his shirt after lifting him out of the stander, or having a doctor tell us how much muscle tone he's gained since his last visit. 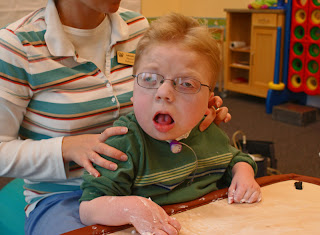 Yesterday was an extraordinary day for those of us that care for Ben. Just before walking down to the bus stop to meet Jessie after school I popped in on Nurse Stacey playing with Ben. She had him sitting up in a therapy chair that he's never quite liked but this day was different. She had hooked up an interactive TV game that he was mesmerized with. Ben had his right hand over the game's joystick on the small desk attached to the chair. Stacey remarked how well Ben was doing with the game - evidently she assumed that we already knew what she was witnessing.

For the next few moments I sat there stunned as Ben maneuvered a vehicle on the screen through a variety of mazes! Not just once but three more times through three different mazes! I grabbed our video camera and of course he immediately quit playing. After I walked Jessie home we tried to get him to accomplish the feat again with no luck.

So we waited until Joan arrived home for another attempt sans the camera. Although he wasn't as successful as he was a few hours earlier he did manage to complete one maze by himself. To say the least we were blown out of the water yesterday!

It just feels so good at times like this. To know we've reached another plateau just makes our hearts soar. And it is so interesting to digest the reactions by each of us. While me, Joan, and Stacey were exuberant Jessie was not all that surprised. Perhaps our daughter has reached a level of understanding herself that can't be measured in testing or grades? 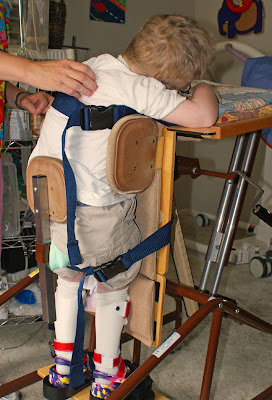 he's such a sweet boy.

maybe jessie knows what her brother can do that's why she's not so surpised by it all.

kids have this remarkable way of seeing what we can not.

i love that about them.

Oh, how I love this hopeful, positive, introspective post! I'm grinning right now. Many, many congratulations, all around!

I am full of tears of gratefulness. I knew too.