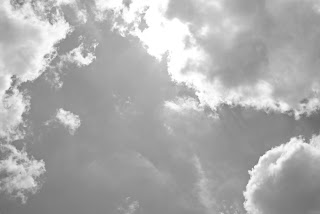 I've been mulling that statement over and over after writing that on Twitter roughly 24 hours ago. Knowing it would manifest itself into a blog post I've been racking my brain trying to wrap my arms (or a keyboard) around the entire concept. Any direction in which I step foot becomes a quicksand or quagmire that will reveal something about myself that I knew I'd eventually discuss here. I guess now is as good a time as ever.

Before I get into the nasty bits let me say that fear is defeated by that old Biblical trio of faith, hope, and love. And before those of you that have a different spiritual belief than I hit the back button I assure you this will not be an attempt to thump you over the head with "The Good Book." Instead I want this to be a "philosophical" confession of which part of my own personal suffering can bring hope to you, perhaps, when you need it.

Like most of you I am worried. Indeed the worldwide financial situation is frightening but what is so very scary is how it will possibly affect each of us individually. Honestly I have concerns for each and every one of you, my dear friends, but I have to admit that my own situation has me losing sleep at night. It seems that I couldn't have chosen a worse time to become a full-time traveling artist.

I've begun the process of applying to some spring shows. With each check I write for booth fees that old vulture (fear) begins to pick at an old carcass that remains in my memory. What if we can't afford to pay for the gas or lodging to get me to those shows? What if no one shows up? After all, if folks can hardly pay for food, rent, or mortgages why would I expect them to buy artwork?

This past weekend was fairly successful. I made some money but with the incredible attendance I should have done much better. Plus I heard almost the same phrase repeated from my fellow vendors, "sales were off nearly a third this year of what I usually do." What if I'm placing my family's finances at risk by mailing out hundreds of dollars right now that we might desperately need in March and April?

I damn well know that many of you are asking either the same or similar questions. The news seems to just get worse too. Honestly I've about had it with all of the news outlets. In fact I find myself turning off the television or radio more so than I can ever remember.

In a conversation with my mother last week I became very inquisitive about how she and my dad felt back in the 1970s when our economy seemed to be in a similar state as it is now. We lived on a farm back then. With the OPEC oil embargo gas stations either ran out of fuel or rationed out what they had until they ran out. I remember sitting in a long line of cars waiting for our turn to fill up. My dad had a below-ground gas tank buried beside the barn so that he'd have an assurance h'ed get to work every day and we'd have enough to run the tractor which was the lifeblood of our acreage.

And that my friends is what both me and my mother remembered about that time in the past. We weren't scared because we always believed Dad would take care of us. That is what truly keeps me up at nights right now and makes me not want to crawl out from beneath the covers recent mornings. Whatever crisis or dire straight we will be facing it is now my job to be the captain of whatever floundering vessel which me and my family are upon.

In January of 1993 my Dad passed away unexpectedly a few days before his 52nd birthday. A huge piece of me, a huge part of my family died with him. Until Ben came along my father was the most courageous individual I knew. From him I learned that physical strength was nowhere near as important as inner strength, mental toughness, and intestinal fortitude. Two and a half years later I would learn just how much of my own strength I drew from him when I admitted to the greatest women of my life, my mom and my wife, that I wanted to kill myself after months of suffering from endless panic attacks, extreme anxiety, and severe depression.

Oh MY, Bennie. God bless you and all of us. It is scary times.

Your last sentence scares me. I want to know how you pulled out of it.

Oh my friend. I am so looking forward to seeing you this weekend. Reading your post made me remember a post I wrote last spring. http://laurenleecobb.blogspot.com/2008/05/truth-about-my-future.html

Hang on to the promises.

I remember those times with the gas lines. I remember tough times again while in college too...

This made me chew my nails, Bennie

Fear is powerful - except when you decide that you won't let it be powerful.
I'm with you on the media embargo - I've switched off pretty much everything. Yes, times are supposedly bad - yet, in the larger scope of things: the sun still sets, your family is healthy, you are healthy and you still can find laughter and smiles. It might not solve the current events, but it at least will lift your spirits to focus on the good things and deny fear it's power.
I'm off to watch the rain - it's beautiful!