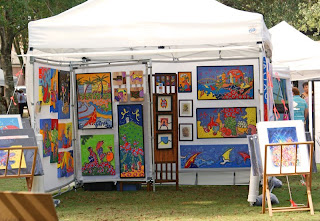 Here's a wonderful booth photo for you to enjoy. Don't you recognize the work? No? Look a little closer if you can (hint: click on the picture to enlarge it). Still don't recognize it? If you guessed that it is mine then you'd be wrong.

It is the work of my new friend Arnol Diaz. I snapped this from the back of my booth yesterday afternoon. Truly I enjoyed getting to know Arnol and his wife; in fact I will be turning them on to some east coast art shows once they return from visiting family in their native country of Venezuela. Meeting Arnol was actually the second sign of three that has convinced me that my visits to Myrtle Beach, South Carolina will be further and farther between.

There were probably about ten painters who attended the show. I don't mind being placed next to a 2-D artist as long as our work differiniates from each other. To the trained eye and those of you that have followed this blog for awhile you knew immediately that wasn't my work. But most folks buying art, particularly in a tourist area, do not have a trained eye. Placing two artists working a similar style in the same area, much less across from each other, is absolutely a no-brainer no-no. Essentially we had customers that thought our booths we're a continuation of each other.

Adding to the problem was that our booths were the only ones facing each other. Everyone else had the opening of their canopies outward to the streets that encircle Chapin Park. Evidently there was to be an aisle that would cut across the middle of the circular park. Trouble was that the area was pounded by torrential rain during our set-up on Friday (omen number one). Vendors in the middle of the park were moved to the perimeter to avoid having their booths flooded.

Omen number three might actually be considered number one since it actually began before I left. Ben was real junky last Thursday before I left. Despite that his lungs sounded good he was coughing up a bunch of goo that had me just a bit concerned. Long story short, after a doctor visit this morning, Ben is on an anti-biotic and needing a slight bit of oxygen. I'm kicking myself because I should've been here.

I do have to say that in the long run we ended up with about $200 profit. That isn't great but it is not worth driving 4 hours each way, working my ass off for three days, and being away from my family regardless of Ben's needs. Because of that Myrtle Beach will not be on the schedule next year (yes, I hear your applause, Christy and Conni).

Some interesting things are in the works at the moment. I want to share some images of the paintings I'm turning out plus those of Ben's new wheelchair seat and car seat. But more importantly I'm thinking it is time to reveal some more of my past.

I'm corresponding with a blog friend at the moment. While giving much thought to this dark secret I've believed it necessary to keep it to myself. My friend has been courageous and in turn has probably helped many people in dealing with the same situation. I'm thinking now might be the time to do the same.

I hate it when they put similar artist or crafters near each other! Bea and I had a similar problem one year when we tried to sell jewelry at a craft show where fully half of the vendors were selling jewelry. You'ld think they would WANT you to sell, so you would WANT to come back. Go figure...!
Hope Ben is doing better, for both of your sakes!

La la, did I hear new Wheelchair and new Carseat???? YES!!!! I want to see the pictures! And those of your work too.

Sorry MB wasn't so great---I'd have liked to come commiserate with you. Give Ben a snuggle from me and from Simon.

bravery oozes from every word you speak, friend.

sometimes Bennie it is cheaper to stay home....lol. You just missed me at the show. Don't worry Kingsport wasn't that much better!

Tell Ben to stop taking notes from KayTar. Just because she decided to get all wheezy, he didn't have to follow her lead. ;)

Yikes! Im so sorry MB was such a bummer. And I truly hope Ben is feeling better soon. I know it's easier said than done, but try not to kick yourself too hard for being away. You're an amazing father.