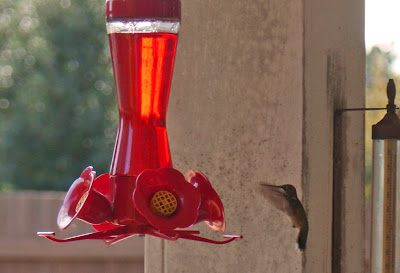 "Alas here comes the Gardener
He's come to till the flowers
The drought of understanding,
Wisdom, peace and love is ours."
James Seals & Dash Crofts
An autumn breeze filled the air here this afternoon. It sliced through the warm air like a ghostly open hand, slapping me occasionally to let me know summer is now over. Even as I sit here typing I am gazing at the sky where the sun has now dropped below the horizon. It is crisp, brilliant with pure color changing every few moments until a final fade to black.

As a young painter I learned to appreciate the atmospheric changes of two seasons: spring and fall. Over the next few weeks notice the lack of moisture in the air. The haze of humidity that shrouds summer landscapes is gone for the most part. The scenery around us is no longer blurred. Instead there is definition, explicitness, a distinct clarity of the natural world surrounding us. I can even recall the moment I learned this.

It was the fall of 1985. Life for me was sort of set in idle. I had just changed my major to art and was about two months removed from the divorce of my first marriage. I took solace in the moments when our painting class would leave for an excursion away from campus. Finding a spot to study my subject matter I would try to become a part of what was around me (hey, those two years as a drama major finally came in handy). A creek, a hay field, a mountainside, an old barn. I became increasingly frustrated with my "work" because my mind set wanted me to paint those scenes just like I saw them. Since none of them looked like a "Kodak moment" I was pissed and was trying to figure out a way to tell my folks that I was now considering a degree in philosophy.

When that moment of clarity arrived I was literally sitting in a creek; not on my ass with cheeks freezing on a chilly rock but pretty close. One of my professors and mentors, Tom Flowers, came and sat with me while I worked. After twenty three years I can't recall his exact words but our conversation went something like this:

Tom: "So how long are you gonna paint this shit?"

Tom: "You did some good things over the summer {my first painting class...ever} because you had no idea what you were supposed to do. You were fresh, bold because you were just having fun. You're over-working it now. Seriously, what you're doing sucks."

Tom: "I expected you to keep a real open mind about painting or whatever it is you want to do with art. You might as well paint by numbers. The first thing you did back in the summer, with no training whatsoever, was a helluva lot better than this."

Me (after a long list of meaningless crap): "Color?"

Tom (starting to get up from his cold rock): "Maybe you should concentrate on how that defines everything around you. How about loosening up just a bit and forget about how others are telling you to paint. Have fun again."

And so how does this relate with my theme today? Easy. I used to love fall...at a younger age. I still enjoy the cooler weather, the color, the feel of a warm fireplace. My problem is twofold. I never ever get to sit in a field, or a stream, or anywhere else for that matter to paint plein air these days. That is one of the prices of being a professional artist. Second, and more importantly, autumn is the prelude to winter.

As I become older I find myself hating the winter months. There are zero shows or festivals at which to work. Yes, I do hear some of you thinking "go to Florida" or out west. Sorry folks. Ben is number one in my life and I will never attempt that again. The last time I went there I lost a huge amount of money and made life very difficult for Joan trying to cover all the bases at home. Plus Joan and I are really affected by the lack of sun and the short days.

The hummingbirds have left now. Tuesday was the last time we saw any of them. Chilly winds now blow and it makes me sad really. The color of autumn used to amaze me and it still does some times but I'd rather watch our little friends fighting over the nectar in those glass feeders. These days I crave color of spring. For me the color of the rebirth of nature takes precedence over the darkness in the death of a summer.

Here are a few interesting facts about hummingbirds:

Funny how light and color affects us all - even those not necessarily artistic. Maybe we just notice it more?

As lovely as summer is, fall, for me, is glorious - the cool air, the smell of leaves, and apples wakes me up from my summer haze and I feel refreshed.

The late winter is when the lack of light gets to me. Come January I'll be the grey ghost, moaning and rattling my doleful chains.

But for now, I am the pumpkin, soon to be transformed into a jack-o-lantern!

It's age. More things creak when it gets cold now.

I mean, the cooler wether is nice but all it is is an indication that winter is fast approaching.

Sam knob is calling. We can drink tequilla from the hummingbird feeder. Plus you can sit your ass on a cold wet rock!

what a great memory.
ya think that's why all your paintings are so vivid?

i get the winter blues due to lack of sunshine...i hate it.

ahhh to be a hummingbird to flutter around...where do they go i wonder?

Yeah.......like you boys are going to let bennie be out there painting while you are building your fire monuments to the fire gods....lol. Just make sure he can stand up right for a little while to "feel those colors." And for all the women folk out there.....I do believe that bennie needs to give a blog on the tales of men going out to the woods to enjoy nature....lol....it is pretty funny.