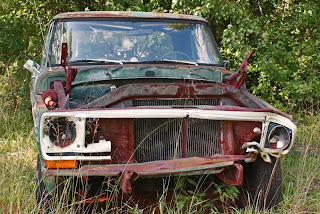 That pretty much sums up just about every Monday or Sunday or Tuesday or whichever is the first day home from a festival. For the record the weekend was just “okay.” I am thankful for the sales total but it was far less than I expected. With the economic news of last week I probably should be ecstatic right now.

Saturday was awesome. Perfect weather, very good attendance, an electric vibe happening among my artist peers, and excellent sales – it all added up to a most happy dinner with the family after the day’s end. Joan brought the kids out late Saturday afternoon so we treated ourselves to a night out at the Liberty Tap Room & Grill. To top things off our table was surrounded by some of my closest local artist friends. We all had a blast celebrating a long successful first day.

Had the outcome of the two days been reversed I would probably feel a whole lot better as I write this. Mother Nature fooled the local weatherman by threatening to rain on our parade almost the entire day. The usual after church crowd never materialized. Evidently they chose to avoid the threat of rain or attended one of the other events I didn’t realize was happening locally. Whatever the reason I did about a tenth of what I sold Saturday.

Joan is thrilled. I guess she is more realistic and had absolutely zero expectations for our success. And I will be honest, had we the success of two weeks ago I’d still probably feel lousy. It’s the nature of the job, which is the initial point I made.

Doing what I do for a living is so much different than any other job I’ve had. Since I’ve had experience in acting (started college as a drama major) and organized sports the experience is very comparable to the investment an actor makes in playing a role or an athlete makes in preparation for his/her sport. For those two or three days on weekends I attend a show the adrenaline rush, the energy expended is intense. Add in the physical toll (setting up and breaking down gear and a canopy within a short period of time, standing on our feet for 8 to 10 hours two or three days in a row, the stresses of travel) and one has a recipe for complete exhaustion after all is said and done.

Nearing the end of the third year of doing this full-time, I’m still not used to the letdown that comes “the day after.” I expect it but I don’t like it. Other than all that driving to and from festivals it’s about the only thing I can honestly think of that I don’t like about my job.

Now for some good stuff: I sold all of the prints of mine and Ben’s collaborative paintings I had on hand and even sold the latest original offered for purchase! It’s not very much but PKS Kids can expect a donation in the near future. So while I rest up and start prepping for Savannah (weekend after next) I’ll try and keep my thoughts on Ben’s smile as folks came out to meet him Saturday. That and the continued success of this ‘charmed” third year .

It is hard coming back to the let down of a show. Those of you who haven't seen Bennie "work" he is the best of the best. He has a great time, looks after all of us, and you can always hear his laugh among the booths......unfortunately at some of the shows a little too much- only because the crowds aren't there to appreciate and buy his work.

I'm glad the show wasn't a total bust, but yeah baby, I know that anticlimax feeling only too well.(heh heh, she said "Climax", heh heh)Bea and I did some craft shows a few years ago, with jewelry we had made and woof! It takes it out of you. "Get your rest - if you haven't got your health, you haven't got anything" - Count Rugen, The Princess Bride

BTW, anon is my good friend Christy B. She's also a painter who has been way too scarce on the "circuit" this year and I sincerely mean that. It really, really helps ones energy to have your friends along for the ride! And other than Joan she's the best at kicking my ass.

Tap Dancer said "climax" on my blog. That is definitely a first.

That let down might be true of all worthwhile things we work hard for. Expending all that energy, all that momentum, once we've accomplished that goal(longterm or short) it's tough to just - stop.

I am thrilled you had a good weekend, despite the Sunday let down (don't those church goers know divinity is found in art??). I hope you are feeling back to normal soon.