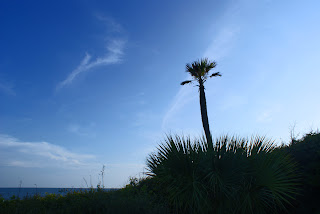 There is another shadow that lingers when exposed to the light. In a sense it is the same one that I previously mentioned - fear. More precisely, the fear of losing Ben. It is the one I talked about yesterday but just like two shadows can be cast from the same profile via two sources of light, this one is just a bit more hazy. And I wasn't aware of its presence until yesterday.

I made a new blog friend who is going to participate in something that is surely to be extremely hilarious (more about that when it actually happens). Gwendomama came by and introduced herself. And since I'm a glutton for attention and information (isn't that why we blog anyway?) I went directly to her site and began digging through her archives to find out more about her. It didn't take long to discover what probably led her to blogging. It's exactly the same reason why my dear friend Redneck Mommy (the source of the future hilarity) began blogging.

What I quickly found right on her front page was a link to this post. I read it. I read it twice in fact. And I felt the most intense guilt I've ever felt about anything. Why? Well here is the confession: even though we have actually known at least 6 children (that's all me and Joan can think of right now - there are probably more - keep in mind that our memories are getting shot at our age) with special needs who have died during Ben's lifetime, we have never attended a funeral. Nor have we attended a wake...or a visitation...or a memorial service...or whatever.

And here how rotten it gets. The parents of that little girl who passed away right next to Ben in that PICU cubicle in December of 2001 drove 2 hours to support us that very next spring at a rally for disability funding on the statehouse grounds in Columbia, SC which led to Ben being one of the featured stories that made headlines around South Carolina.

In the past we've (I've) had an excuse. We already live with that first shadow following us, why do we need for that second one to grow more distinct? Have its edges sharpened and made more definitive for us to see? We know it's there. Why have two always following us around like two pit bulls ready to rip our hearts out? Gwen so very eloquently made me feel like shit (and that is a good thing Gwen so don't apologize).

Here it is in Rule #1: "If you can visit them or attend the memorial service, do. If you can offer your presence, it will be appreciated. Even if you cannot offer any words at all, just be there. Just that is enough, because we (the parents) know that there are no words."

I posted about the death of Lauren, one of Ben's classmates back in June. Me and Joan had actually mustered up the strength to finally attend the funeral. About 30 minutes before we were to leave I called Joan and told her I couldn't do it. My argument? Ben was doing too well to have this hanging over our heads. How fucking lame. Complete total selfishness...and that second shadow of fear. We can now count at least six opportunities to support families like us, to show a solidarity in that we've lived a similar life, dealt with that shadow and so we're now here to support you in the aftermath. Being the big hitter in this family I've struck out all six times when a game was on the line.

I can tell you that has now changed. Had Ben turned out "normal" I'd have attended every one of those services and at least said something in support of those grieving families. Long time readers will know that we consider our son to be a blessing and has a purpose in this life. My personal fear has kept me from looking closer into the shadows and discovering one of those purposes.

Had I attended each of those memorials I could've reached out and held those parents. We would've cried together and probably say nothing; and yet we'd look at each other and know everything there is to know now. We'd also understand that the questions we have won't be answered for awhile. At least I could've given them that. At least I know now I could've been a better parent of an exceptional child.

Oh honey, I'm sure those other parents understood. I can't even imagine how it feels to live with that particular cloud hanging over even the sunniest of days in your life, but I do know the fear every parent has when it comes to even the possibility of losing a child. You do what you can.
If life is about learning lessons along the way, at least you are growing and learning right now. We all of us can be better people than we are as is.
Hugs to you all, for being as wonderful as you are right now.
And now I'm going to go find a kleenex...!

More words. (You'll learn that about me.)


I wish that those words I wrote would never ever instill guilt in anyone. Please just learn, all of us, my son's life a beacon of a gentle reminder. Because he was gentle. He was the Bodhisattva. All you have to do to please a Bodhisattva is hear their message, learn from them.
No guilt.

I would not have gone either. I really don't think I would have, could have. Although we had no reason to believe he would die young, I knew he was just a temporary gift. I didn't want to believe that, but what choice did I have?
I didn't know any babies who died while Elijah was alive and our lives felt so fragile - suspended in amber, yet rocketing through our too-short time.
It was a surprise, each person who could do it, each person who came to his beach memorial. Each one a gift, but I promise you this - not one person who was not there was a glaring insult to me. Not one.

We knew. We know it was hard to show up. We would never hold it against you.

Bennie - don't be so hard on yourself. There are other ways to show support. Other ways of being there later on. Yes, it is OK.

The two deaths I mentioned in my comments on your last post happened within days of each other. In fact, I got word of the second child the night before attending the funeral of the first child. And yes, it was incredibly difficult to attend that funeral. In fact, my husband couldn't bear going and pleaded with me not to go. I'm glad I went, but I as so emotionally spent, I coudln't attend the second one.

Like you, I feel horribly selfish and lame for not making the effort. But I know I would forgive a friend in the same circumstance. And I know I will make the effort later.

G - I know it's okay because I've learned another life lesson. I'm better off now for seeing the other side via you and Tanis. The next time (and unfortunately there will be a next time) I'll be braver and stronger.

K - Thank God for forgiveness. It is easier I think for us to do that. And like Gwendo said, I am certain those parents understood. It's just a matter of conquering fear.

When we thought KayTar might have something that was progressive and terminal, I couldn't even write the words...I can't imagine I could have faced the reality, even if it was someone else's reality in that moment. Some things do hit too close to home.

I'm even worse than you. I don't do funerals and wakes at all or rarely. I hate them, hate having to think of the family going through the motions of greeting people and what do I say, what do they say. I say at least once a month. No visitations for me. Of course, I'll have a funeral mass, but if no one came I would not care.

I've never known anyone close lose a child. Gwendomama's viewpoint is very helpful and I'm sorry she knows it personally.

I definitely will think about it harder when there is a next time.

Hey Bennie,
Whether you call it selfishness or fear, I suppose it's something we all share. I suppose that's why I'm hesitant to leave a comment when you blog about Ben's more difficult days, or even subjects like this one. It's pretty brave of you to be so open about this, and I thank you for that.
Mark