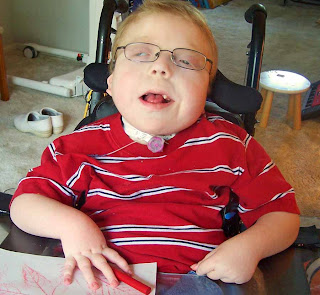 One of the true pleasures of doing what I do is meeting other families facing similar challenges as us. Not surprisingly another opportunity occurred on the 4th of July up in Southport, NC, which I will get to momentarily. In all honesty I’ve delayed this post for almost a month now and in fact I’ve almost trashed it on several occasions.

When I returned home that week we were anticipating our trip to Charlotte to explore the opportunity for Ben to live trache-free. As most of you know the news was not good – not devastating but very disappointing. And then came the unexpected illness that interrupted our joy for awhile. Anyway I’ve revisited this topic once again and found some enlightenment I’d like to share.

For the most part I meet parents who are pushing a wheelchair holding their severely disabled child. There have been exceptions but those acquaintances have been rare. I've never truly understood why I don't meet so many exceptional older kids or young adults. In fact I really never thought much about it until after I met Mary and her mom, Beth on Independence Day.

The two-hour parade through downtown Southport began around 11AM. Immediately the shoppers dwindled to just a handful and I took that opportunity to relax for awhile knowing this would be the hottest and longest day of the week. I wasn't paying much attention to the few shoppers but at some point I noticed two women spending some time looking through one of my browse bins.

Here's an aside that needs a bit of an explanation. Most of us working as traveling artists love wearing sunglasses. First it's a great form of eye-protection from the sun during the summer. Secondly they allow us to keep a hidden eye on our customers without spooking them so we'll know when "to jump in" and do our thing to make a sale. Trust me when I tell you that the next time you enter an artist's or crafter's booth, we do know you are there.

I acknowledged the taller of the ladies and then glanced around as if I was enjoying the sounds of the parade. By the time I turned back the shorter and younger of the two had stepped around the taller one to look at the rest of my artwork. That was the first moment that I realized Mary was somewhat unique.

It appeared that she was wearing some sort of brace near her shoulders - the upper part of her left shoulder looked like she had on a football shoulder pad. When she glanced at me I smiled. In return she gave me a very faint "pretend" smile.

She now had my full focus. Perhaps the younger lady had a deformity? I didn't want to embarrass her by calling attention to it. In that particular case there would really be no correlation with Ben and yet I so wanted to connect with them.

And then it happened. Mary turned full forward to look at another browse bin. She was wearing a trache! I stood up and walked over to her. "Are you wearing a trache?" Obviously her mother, Beth, looked at me like I had worms dropping out of my ears. "My son has a trache!" The ice was broken.

We spent the next few minutes listening to each other's stories. Mary was born with several internal bone abnormalities that required extensive external bracing. Along with several operations to correct a severe case of scoliosis (just like Ben has) her upper airway was eventually compromised. Mary received her tracheotomy around the age of 12.

Just like Ben, Mary spoke using a Passy-Muir valve. If I haven’t explained this before the valve is a device that allows a trache patient to talk. Essentially it covers the airway letting air get in but not letting it out. As the patient exhales, air from the lungs is forced over the vocal cords and eventually exits via the nose or mouth.

Typically Mary’s voice was very shallow and rather squeaky but she was very easy to understand. She was 18 but still had a year or so remaining in high school. I could on her face that she was looking forward to her future. I’m not very good at deciphering body language or reading between the lines as thoughts are being shaped into words (Joan is quite good at it), but I’ve grown accustomed to the signs of suffering. Mary clearly had those distinctions that told me she was tired not only of the physical pain but the emotional trauma she’d endured. That was made very clear when Mary revealed that she was no longer attending a regular high school. I immediately thought of my young friend Jessi who has shared some of her painful experiences on her own blog.

Eventually it was time to say our farewells. Beth told me how much her daughter wanted one of my paintings but they couldn’t afford it. That’s when Mary told me her mom was soon to become a nurse. I know that the two ladies left with a smile and a new original painting. As much as I always want to do more, a gift of art is usually all I have to offer.

I’ve thought of Mary quite often over the past four or five weeks. I’ve also thought of Beth too. There was no mention of a father; no wedding or engagement ring to make me think there was a man in either one’s life. As Joan and I have watched Ben endure his journey neither one of us can imagine doing it alone. Our marriage has survived thus far but God forbid, should it fail, we will still be a team.

So what did I learn? While we all strive for our independence in life, particularly when we are young, in all honesty we will always be dependent upon one another. We need each other. We need our families, our friends, our fellow bloggers, and all of the loved ones we could ever collect in our little circle of life. And that includes those of you who are reading these words at this very moment.

It's why one should never be ashamed to ask for help when ya need it. Everyone needs someone.

I have that same thought so often - that all of us need help in some way. Even my evil geneticist. One day he will get old, or sick. What will he think of himself?

It is amazing how many kids I notice now with feeding tubes. I would never have know if julia wasnt' one of them. Its like a secret club we all never wanted to join!

As for marriages and support, I have realised this year that Norm is a far more amazing person than I ever thought he could be. You have to take the 'sickness' part of those vows seriously. I saw so many moms alone in the NICU. Hardly any dads are around. You are a rare gem Bennie.