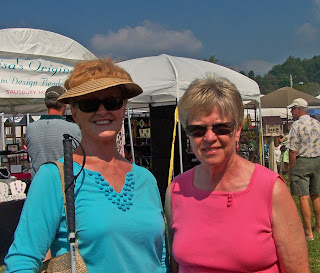 A Different Way of Seeing

After opening the booth and chatting with friends Sunday morning I sat down in the back of my booth to cool off from the abnormal hot humid conditions. I had a couple of fans running so I was relaxed sipping on my usual breakfast of Diet Coke.

I soon noticed two ladies that had stopped at the front of the booth. Like usual customers they were looking over the paintings and quietly talking with each other. Had I not been exposed to the device the lady on the left was holding I would've assumed she was just another typical admirer of art, in particular colorful paintings.

The woman was holding a long pole that resembled a golfer's driver. In fact what she was actually toting is called a Hoover cane (sometimes called a long cane). For the first time while traveling for art shows I had a blind person who for some reason was staring at my artwork.

I approached the two ladies and introduced myself. My curiosity was obviously piqued. The woman on the left began asking me questions about my work. "Can you describe what you do?" "What style is it?" "Can you please tell me the process?" It was easy to discern that she was quite interested and excited.

Honestly I don't know how long me, Christine Farnsworth, and her friend Karen Miller conversed. I just know it was way too short. Christine's story was fascinating! And our journeys, while very different were also quite similar. It is the typical conundrum of families living in the world of special needs.

Like most blind people Christine can actually "see" some things. It was so very moving as she touched my face to show me what so very little she can actually distinguish. Ironically she can perceive more distant images better than closer objects like my huge nose which was only two feet away. 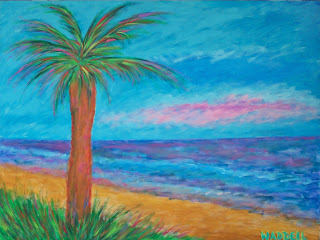 This painting was hanging on the back wall of my booth and the one that caught her attention. It is fairly large (3' x 4') so Christine was able to describe it to me and Karen after studying it for a few moments! To say I was blown away is an understatement.

"I see green near the front." Yes, that is the dune grass. "Then there is orange or brown" That is the the sand. "I can see the tree and purple to the right." That is the ocean. "So the blue is the sky." I was stunned. Obviously this was a great opportunity to tell her about Ben.

Through our discourse I discovered that her blindness came about due to a genetic disorder. Christine had gradually lost her sight around the time she turned 40. Her mother was 13 when she became blind. She also knows that her daughter carries the same mutated gene. Most likely she will also lose her sight one day.

But here's the nitty gritty; the place where our paths converge like a living breathing letter Y. If there was any bitterness associated with that lovely woman then she should be on stage. Truly I met a very happy fulfilled delightful humorous woman Sunday morning. Our philosophies are essentially the same. When you are faced with a horribly tragic circumstance in life you have two choices: let bitterness bury you or make lemonade out of a lemon.

As our conversation was winding down I told her how I wished I could afford to give her a painting. She and Karen were very humble in saying that wasn't necessary. I was about to insist they take a print when an incredible idea hit me "like a two-ton heavy thing" (a tip of the hat to Queensryche).

For some reason I had brought along ALL the canvas panels that Ben has completed that Dad has not worked on. Honestly I don't know why I did it. Maybe it was an attempt to keep a connection with Ben while he was sick and I was far away? I really don't know.

I ran to the back of the booth and grabbed them. They were in no particular order but I asked Christine to pick one out. The painting lying on top was untouched by me. The entire panel was covered in thick acrylic paint. Ben's finger prints and messy drippings created an incredible texture. The dominating color was red and I told her how much Ben loved that color.

I sifted through some of the others but my new friend kept telling me she wanted the first one. Once again the hair on the back of my neck stood up as she ran her hand across the surface of the painting. "This one," she announced. I signed it for Ben. We all hugged for a second and third time before my new friends walked away.

Despite the crappy week, the pure mental and physical exhaustion of the previous 7 or 8 days that two-ton heavy thing once again let me know I was where I was supposed to be. Have I mentioned before how much I love my job?

Final note: this experience has led our family to an important decision about what to do with Ben's paintings. Please return over the next few days so we can share our new vision about them.

Christine and Karen sound like wonderful women. Glad you got to make new friends, and it's so cool that she could see the beauty that is your work!

Can't wait to see what the new plan is for Ben's art!

What a wonderful story and encounter! I can't wait to hear what you're going to be doing with Ben's paintings. Hope he's feeling better and that the show was a good one!

I miss Ben's work--it's been too long since we've seen some. That wasn't very subtle was it???? Looking forward to what's coming!