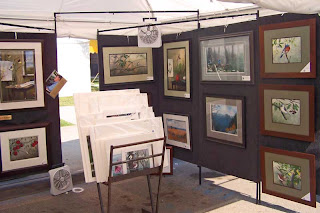 A Cool Glass of Lemonade

The show in Roanoke, Virginia this past weekend was one of the best of the year so far in regards to sales but it was also rather difficult given the stifling heat hovering around triple digits both days. There was plenty of griping and moaning about the sauna-like weather. Yours truly joined the chorus on Sunday after I forgot to charge the battery that powered my fans. I lost power just after lunch when the temperatures were just reaching their peak. Most of us artists could've used a tall glass of lemonade to keep our cool. And in fact, sense we paid attention, some of us were quite refreshed by the presence of one particular painter and his family.

There's an old saying that when life gives you lemons, make the best of the situation and make lemonade. There's also the thinking that you can't make chicken salad out of chicken...well you know the rest. Two metaphors with two opposite ways of thinking. I'd like to think that our family for the most part chose to slice up a few of those lemons, grabbed a cup of sugar, and dropped plenty of ice cubes in a pitcher of water when Ben came along. 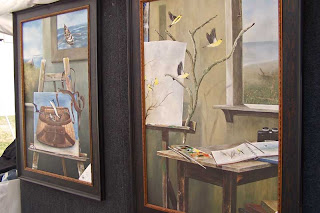 My first out-of-town show that I participated in took place in Blowing Rock, North Carolina a little over three years ago. After setting up my gear I walked around to take a look at the art the other vendors were selling. To say that I was intimidated is an understatement. One particular painter caught my attention and as I passed him several times later on that day it was obvious that he'd caught the attention of plenty of shoppers as well. That was the first time I had laid eyes on Marcus Thomas.

Over the past three years Marcus and I have had the opportunity to get to know each other just a little bit. This past weekend however provided a wonderful chance to finally spend some quality time with Marcus, his wife, and sister who always accompany him. You see Marcus is a rather unique painter. He applies paints to a canvas holding a brush in his mouth. Marcus is a quadriplegic.

In 1985, just a few months after finishing college, Marcus was severely injured in a snow skiing accident. It was almost a year later that he received a cheap watercolor set as a gift. Just like our family one of those life-sized lemons had tragically fallen upon the Thomas family. And just like us Marcus seized the opportunity to live life to its fullest.

Another parallel is that like me and Ben it would be easy for my friend to take advantage of his situation. A disabled painter trapped in a wheelchair begins to paint to support himself or make a little extra money. The thinking could be that regardless of what the work looks like the general public would feel sorry for me and buy my paintings, right? Wrong. Marcus is good. Damn good! Marcus is very proud of his work as he should be. His paintings are collected by individuals, galleries, and even museums in the Southeast.

To make the situation even more incredible are the two people who are always with the guy: his "Dream Team" as I call them. His wife Ann and sister Amanda share similar personalities and traits with the loved ones surrounding Ben. The whole family has a twisted sense of humor, for the most part they don't cut Marcus any slack, and they don't think they're doing anything special other than just living the life they were given. Lemonade, my friends.

These are fun and amazing people to be around. I'm already looking forward to my show in Banner Elk next month since that'll be the next time I get to see the Thomas family because it is indeed a treat to finally get to know them like I've wanted. They are definitely family to us.

And here's one final thought that tells a little about how we think. Although we did have plenty to talk about in regards to disability rights and exceptional living, Marcus and I spent more time discussing another favorite topic while we had the chance: creating art. 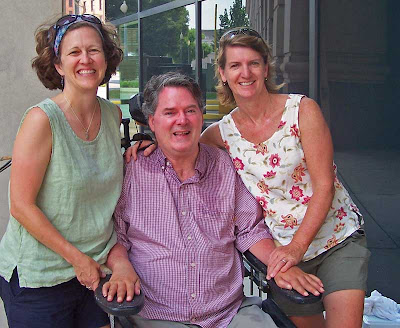 Amanda, Marcus, and Ann always have a smile. By the way Marcus, even though I used Photoshop I couldn't make you taller.

His stuff is good, wow! Sounds like a fun family to spend time with, too.

What a great story, and wow- look at those paintings - he IS really good!

I'm glad you had a good show, in spite of the sauna conditions - is it September yet, because "I'm melting! What a world, what a world!"