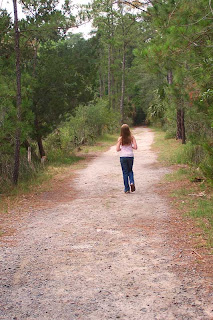 My time with Jessie last week was the most precious I've spent with her in quite a while. That includes walking her home from school in recent weeks since that routine is quickly coming to an end. It is difficult for me to digest that in less than three months my baby girl will start middle school.

That thought has weighed upon me a great deal as her school year nears its end. Jessie is of small stature which has prevented me from seeing some of the physical changes I've noticed in her friends but I know they are there. It seems like just last week that I was feeding her a bottle at two in the morning yet one day soon she will begin the inevitable transformation into a young woman, a thought that momentarily terrifies me.

Most of you recognize the title reference to the Robert Frost poem. Frost is my favorite poet and I've nearly worn out the pages of my hardback collection of his best works. The Road Not Taken is indeed a testament of of stepping away from the norm, taking chances in life, exploring new places and new ideas. And I was thinking of the poem when I snapped the above photo last Thursday.

Jessie is about to embark on a new journey in a few short weeks. My hope and prayer is that the paths she chooses are healthy ones that bring joy and adventure into her young life. And even though I am afraid for her at times I know that Jessie carries with her a sense of maturity that many her age do not have. That is because she has taken one road less traveled - the road a sibling of an exceptional sibling walks.

Unlike Frost's poem she had no choice to make. It was made for her. But like most sisters and brothers of a special needs loved one she has braved the darkness, the furrows, and the slippery slopes only to become something special herself. So I suppose I should'nt worry so much about her.

As we returned from our walk in the woods she held my hand until it was time to let go. God, I pray I'll know when that time comes for me.

jessie will always be daddy's lil girl. she will work that angle and twist it and make it hers you wait and see. when she's late coming home-she'll bat her eyes and you'll be all.."okay" and you'll forget why you were angry in the first place. these years she's going to embark on here shortly? horrible years for a young girl. keep her grounded cause some of those girls in middle school are hateful bitches. hateful.

Last night at Bunco, I was talking to a woman who is married to a man whose sister is much like KayTar. She said he's always had to be mindful of his sister and learn to love and care for someone in a way many don't ever learn. She said it has made his such a mature and good man, and that's what I hope for our kids too. I think having these experiences with their special brothers or sisters teaches them a lot that other kids don't have the privelege of learning.

Oh honey, I know what you mean - we have one more year until the middle school looms and its already freaking me out. The changes this past year in my almost 11 year old son have been marked, and we know, are just a taste of what's to come. I'm with you - grab those sweet moments with both hands while you can, because our babies sure grow up fast!

This is beautifully heartfelt Bennie.
I can only hope Katie learns the same lessons, though we wish they did not have to learn them the hard way.