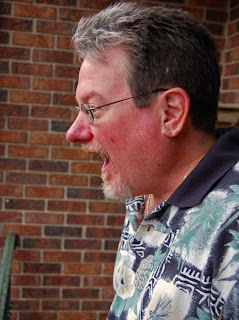 First let me say that the art reception at my Mom's this past Saturday couldn't have been any better. It was so very wonderful to see so many friends, old and new. And I mean really new! Just keep reading.

The food was out of this world thanks to Ben Gold, chef at Bistro Europa and another new friend. Sales of mine and Ben's artwork came close to beating my all time show total which occurred at Blowing Rock, North Carolina in July of 2006. Best of all as my mother said yesterday and it couldn't have been expressed any better, we didn't have to facilitate the party; it just walked through the door.

All of those factors contributed to my renewed positive outlook that I have this April 15th, the deadline here in the United States for filing taxes. But none of those can come close to providing the joy our family received from the "secret gift" Nurse Lisa helped plan. I plan to blog about and post some good pictures of the party tomorrow but tonight I want to share with you some thoughts and photos of one of the most important moments of our journey with Ben.

About a week ago Nurse Lisa asked innocently enough if she and her husband could bring another couple along. In fact she said they were very interested in my artwork (real sneaky one there, Lisa). My response was "of course" since the idea was to sell as many paintings as possible. Other than getting directions, Lisa didn't say another thing about the party despite me talking about it constantly last week.

Long story short (you'll probably read more about it tomorrow), Saturday was incredibly hectic. Jessie had a dance competition that ran all weekend. In fact she was performing right about the time guests were beginning to arrive. Ben ended up tagging along with Joan to the competition because I was slammed with last minute errands.

As soon as the clock struck 6PM folks started arriving. Mom and I were still warming food, pricing the paintings, and making sure the wine was chilling. Around 6:15 the doorbell rang. I went to answer it.

I looked out the side light window and saw Lisa and her husband standing on the steps. No big deal. In fact I figured my Mom would probably put poor Lisa to work since we still had a few things left to do. Mom never got the chance to ask.

After I pushed open the door, I immediately saw that she had not invited another couple but an entire family! In mind I was thinking, "Great - I've told so many other folks that we preferred that children stay at home - they are gonna be so pissed we allowed these people we don't even know to bring their's." Seriously. That was my immediate thought.

Then I heard Lisa ask, "Don't you recognize them? You should."

I looked at the mother. She looked vaguely familiar. I looked at the two little girls with her. Nope. They're not in Jessie's class. Then I looked at the father who was holding another child. Again he looked like I had seen him somewhere. I turned to Lisa and kind of shrugged, embarrassed that I couldn't recognize the long lost faces.

The small child the father was holding made a familiar sound. I looked back at him. At HIM! At that little boy that looked just like Ben! "Simon!" I screamed. Oh! My! God!!! I was standing face to face with another PKS family! And not just another PKS family, one that my own family was so very anxious to meet!

Jim, Gretchen, Maddy, Natalie, and Simon Peter had driven from Michigan (I'm guessing 12 hours one way) to be at my reception. If that hadn't have kicked my emotional ass then nothing would've. To be honest the rest of the night was a blur other than introducing Joan, Jessie, and Ben to our new friends. I had work to do but I so wanted to spend time with the Peters. Fortunately they were sticking around Sunday so we had them over for dinner.

There is much more to be told about the Amazing Saturday of April 12, 2008 and the family dinner we had the next evening. I cannot fit it all in with the this one post. The elated emotions are still charged. The sadness of saying goodbye to them Sunday night is still a huge lump in our throats. The warmth of knowing the Peters will live in our hearts forever.

So very much to digest. So little time to enjoy it. Make the best of your moments, my dear friends (readers). Remember there is more to come... 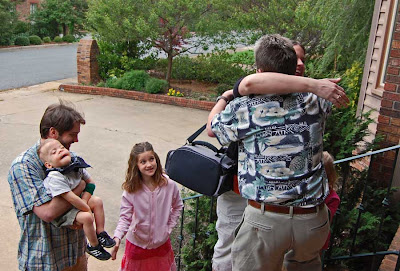 The photo at the top was made by Lisa right at the moment I realized who I was meeting. In this one Gretchen and I share a hug. 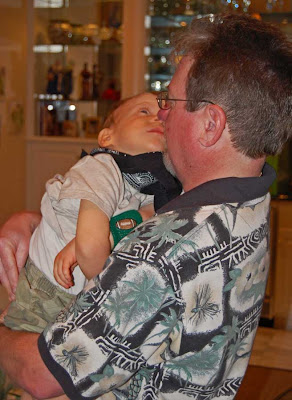 I had the honor of introducing Simon to our patrons. What a beautiful child! 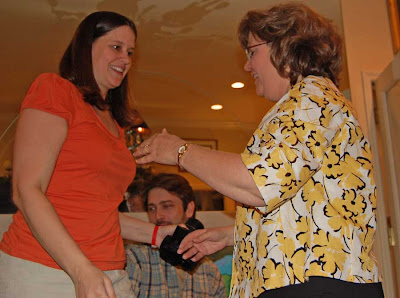 The two incredible moms meet each other for the first time. 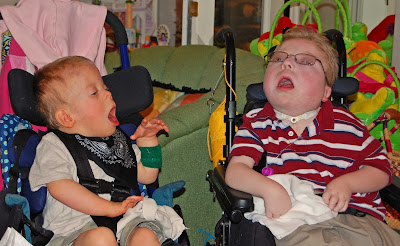 The boys share some PKS conversation. They were HILARIOUS together! 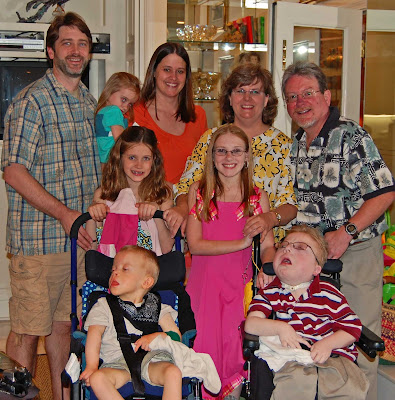 The Peters on the left and the Waddells on the right.

How freakin' wonderful is that? Nurse Lisa rocks!!!!!

I'm glad to hear you had a good time and your sales were good and the foods was all yummy. Ohhh how freakin' awesome is that!?!?!

Now we just have to keep it up! WE MISS YOU ALREADY!!

(Except I'm feeling guilty now for bringing kids to the party!)

Uh...when you drive a thousand miles to attend a party, THE KIDS ARE WELCOME! Seriously, they were awesome!

Heeheehee! That was seriously the hardest secret to keep ever!!!!! I was giddy from the moment Gretchen announced that they were thinking of coming. And I was honored to be in the presense of 2 of the most awesome families in the world!!!!!

WOOHOO! That's so awesome!!! I'm thrilled Nurse Lisa had such an excellent surprise up her sleeve. Nice one, Lisa.

they must be an amazing family to travel that far for a weekend. I love the look of shock on your face!

hope all is well Bennie--- Ben looks great-- looks like he has had a growth spurt?