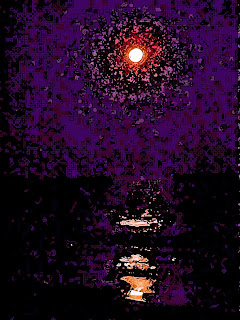 The Return to Sender

Things are beginning to settle down around here. Our day of yard work was (thankfully) postponed due to spring thunderstorms this morning. Honestly I feel so badly for our neighbors who ALL have immaculately kept yards and neatly trimmed shrubbery.

Unfortunately for them I now have software that makes my crappy photographs works of art. The picture to your left is of the moon rising above the Atlantic coast last Friday. To say the least it was incredible.

Because of the rain I had a chance to play with a few ideas that might end up as decent prints. Days like today are indeed fun for an artist because we have an excuse to ignore chores and explore some things we normally would put on the back-burner.

Over the next few days I'll let you see some of the new mosaic pieces I finished last week. Although I'm still experimenting the end results are quite pleasing. In fact I went to a local bait & tackle shop and found some cool things to use in my latest work. The folks who own the place were quite interested. Enough so that I'll be delivering about a half dozen mosaics around the first of May for them to sell! Good stuff, my friends!

The next few days will be quite busy since I head back to Savannah at the end of the week. I'm actually looking forward to the trip and the following six weeks of shows. I've obviously had too much rest and too much good food the past three months given the fact that my waistband has increased somewhat over the winter.

Hopefully I'll have a HUGE post about Ben tomorrow. Joan took him to the orthopedist Friday. There is little to report other than continued "bad news." Let us just say the good outweighs the bad in Ben's case.

beautiful picture!
very different than all your others. i love how you used darker colors..the purple almost appears black...very very pretty.

i'm glad to hear the good outweighs the bad with regard to ben. very good to hear.

Can't wait for the Ben post! Glad you're home safely!

I love this picture. Can't wait to hear your Ben story.