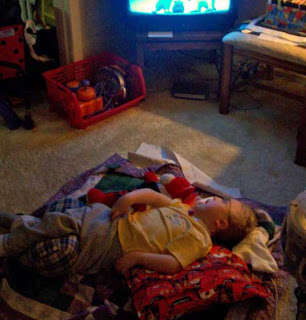 
Ben's Christmas present from his Aunt Carole & family was an addition to his growing DVD collection. Long story short Joan and Jessie "officially" transformed what was formerly our living room and dining room into The Ben Suite over the holiday. Included in this mini home makeover was Ben's inheritance of an old television we weren't using.

After hooking up our portable DVD player (the real cheap one that keeps the kids occupied on rainy days in the camper), our son now has his very own home entertainment center! The fact that it's not High Definition, all-digital, with surround sound capability doesn't bother Ben in the least bit. All of that stuff is reserved for Dad anyway if we ever hit the lottery.

We actually watched Happy Feet on one of our family camping trips earlier this year and "The Big Three" were only mildly entertained by the movie. Let's just say we gave it three limp thumbs since all of us decided sleep was much more important at the time. Evidently Ben liked it a little better but made no outward attempt to show us. More than likely he was laying his head in his sister's lap doing his worship/half-asleep thing he does for Jessie.

The photograph was snapped about 45 minutes ago. Ben is watching his late afternoon movie which by his choice has been Happy Feet the past....oh...since we opened the package? I won't give the plot away just in case some of you thought it was as much of a snoozer as the rest of Ben's family but basically it's a story of a penguin who is different than his young peers. He embarks on a journey to discover his self worth and in the end his "talent" positively affects his community.

Now my question to you fellow bloggers: is this a coincidence? Does our son understand this not so complex idea? Is it just the fact that there is a lot of tap-dancing and good decent music involved in the animation? We don't know. I will say that it has really given us pause to meditate and think about the situation.

KayTar's fave is Alvin and the Chipmunks (original) at the moment. She walks around singing "Alvin, Simon, Feeadore. Doot. Doot. Doo-doo-doo DOOT!" Don't you LOVE watching things on repeat? ;)

And I have no doubt Ben could be drawing those conclusions...but I'm sure the fancy footwork is a big selling point too!

I agree with your review of the movie, it was absolutely boring and almost unwatchable, though my wife and daughter loved it.
Maybe your son has been having trouble sleeping and the movie helps.