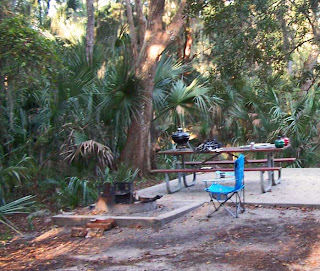 Hello? Is this Thing On?

I do realize the accompanying picture isn't that interesting but it is a remnant and a reminder of the last time I spoke to God. After packing up the booth, loading my gear into the van, and grabbing a bite to eat (and one last perfect Bloody Mary) I went back to the lonely camper and built a fire. Many times I have sat in front of a campfire after a show toasting The Almighty for the gift of good sales or at least a profit.

There have also been those occasions however when the mood around the fire ring hasn't been so pleasant. Sunday night was one of those moments. In complete exhaustion I told Whomever Is In Charge that I have nothing left to say to Him or Her. Since the end of August I've had only one show where I've made a decent profit. All the others I've at least broke even but that is not going to help pay the bills. Even the one good show had it's downside when one of my selling days was stolen from me due to a snafu by the show committee.

On top of that we found out this morning that the money owed to us for our work at EdVenture Museum back in September won't be coming for a few more weeks. The huge sucking sound you hear in the background? That would be my art career making its way down the porcelain hole to the ocean.

The outlook doesn't seem to positive either. With gas prices once again topping $3 a gallon folks are going to think real hard about spending $25 on a print when it could pay for a quarter tank of gas in the SUV. And of course the expenses getting to and returning from a show just doubled.

I'll admit it. I'm in a bitchy mood. And I hate it. I'd rather be my positive "color the world with brilliant hues" self but it's difficult when you're faced with the reality of giving up a dream.

It honestly seems that life turned difficult right after Joan and I said "I do." Our wedding took place just three months after my dad unexpectedly passed away. We then struggled for eleven years to keep our family business afloat only to fail. In the mean time we accumulated debt throwing money at our burning business and then somewhere in between Ben came along. Whatever savings we had went down the drain since we used it maintaining our household while our son was fighting for his life in the NICU. I realize life is hard but every now and then normal people catch a break, don't they? We wouldn't know since anything close to normal happening in our lives occurred around 1993.

So I get to unload on you unfortunate blogger (if you're still reading my spewage). Any ideas? I'm open for suggestions. I just can't pray right now. I don't want to. In fact I just don't see the point in it any longer. Bitter? Yes I am.

It seems as if you're waaay overdue for a break. Who says all the nice guys finish first?

Slick - keep on blogging, brother. I need the laughs my friend!

I'll pray for you, since you can't right now.

So far though we still have a home with plenty niceties, family, friends, good health, food and jobs. Plenty to be thankful for. So when I want to whine and complain and pray to hit the lotto, I gotta look at these blessings. In many ways, we dug our own grave.

I don't know what's going to help you (a contract, new job, lotto winnings) but I'll pray you get it!

Just sent you an email.

I am a spewer. Its good to get a good ranting out.

I don't know why bad things happen to good people, and I don't have any advice to give you but I know that good things are going to come your way. And even if you are broke, you guys are rich in love.

I haven't been on good terms with the guy in charge for a while. I am tying to come around on that because I am thinking it might give me hope that there is a purpose to all this.

I'm sorry things are getting you down.

I didn't recognise the video at first but even before I clicked I was thinking of this song.
My favourite line was always - Did you make mankind after we made you?

I remember that video and always thought it a little strange. But after my past 2 years the understanding is dawning.

Even if you can't pray for yourself right now, remember to thank Him for Ben's health-no hospital stays since 12/05, great verbal development, physical strength. He did it, we helped.

Let your family and friends that are in a different place pray for you and all of your uncertanties. You'll be ready to pray again when the time is right!

We love all you guys! Sorry to see the stress. DH and I are heref for you!!!!

Thanks for the kind thoughts everyone. It doesn't help things when you arrive home and have two days to do laundry, spend time with the kids, work on paintings, fill up print orders, and then head back out on the road.

All that crap just interferes with blogging.