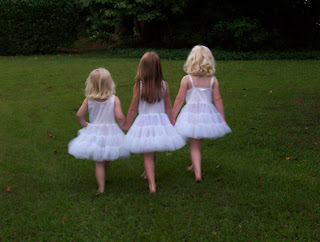 I've been hesitant to create my own meme since I've started exploring the Blogosphere. Mostly my fears have been responses of, "how dare he, he's not a mama!", or "that's really stupid", or "that guy is just trying to get his site counter happening!."

Honestly I did have an enlightenment due to a question from my daughter. Jessie is so very inquisitive and made me think about some things that I thought might make a pretty good meme. A few days ago she asked me what I miss by being an adult.

My response back was, "Why are you asking?"

As any young naive kid would say, "Just asking!"

Well here it is, my first official meme to be thrown into the Blogoshere. Credit goes to my 10-year-old daughter who makes me want to cower in the corner when she asks stuff like this. So cower in the corner my friends! I'm thinking 6 questions in three categories would be fairly easy (heh, heh). Link back to me would ya. I honestly would like to read the responses.

1. Having all day every summer to do whatever I want. Did we or did we not hear every adult tell us how we'd one day appreciate this comment? Well I do appreciate it now. Let me say I miss riding my bike everywhere known to man, endless baseball games in the backyard, and eating as much ice cream that a belly can fill without having to consider the amount of calories I just ingested.

2. Playing team sports when it meant something. I could go on and on with this one. I played soccer in high school and was a fairly decent hitter as a baseball player. You know why we worked so hard? Girls. I dated a cheerleader back in The Day and I wanted to make darn sure that I didn't embarrass myself when I took the field.

What I don’t miss:

1. The popularity contest. Man, I still think the cruelest stuff I've ever witnessed occurred in middle school. I take pride in the fact that my friends were spread out among all types of kids: the jocks, the geeks, the not-so-popular girls. Having Ben makes me wish that more exceptional kids were mainstreamed in our schools back then. I'd like to think I would've acted different than the typical behavior of teens.
2. Being a student at a strict Christian school most of my teens. Looking back it doesn't seem so bad until I consider all the guilt I'm still left with. I missed out on dances, playing even more sports, and courses designed to give you credit toward college but I think I made up for that stuff pretty well wile in college.

What I missed out on:

1. Playing organized football. I played one year of pee-wee football before enrolling in the Christian school (where I learned to play soccer). Being of small stature I would've probably rode the pines but I still would've liked the experience.
2. Spending more time with my dad. This is a tough one because there aren't many things me and my brothers missed out on because my dad was a hard worker. He literally had nothing growing up and wanted to provide things for his sons that he didn't have. Eventually we had those "things." Horses, motorcycles, a car for each of us when we started driving, a tennis court. I'd trade all of it for a fishing trip or attending a baseball game with him.


I'm tagging a few of you but if you'd like to play along just let me know in the "critiques" section. Above Average Joe, Nurse Betty Boop, Gretchen, Vance, Rubenesque Writer, & KimmyK consider yourselves on the clock!

This will be fun! I'll have to think real hard while my hard-drive is being unfried :( I'm currently borrowing Hot Rod's computer to catch up on a few things while he's supposed to be sleeping, hahahahaha! I'll email you when I get my new post up!

I wonder if the long lazy summers I remember were really that good. They sure seem perfect.

Haha, my responses should be interesting considering I'm only 23! I'll get to it tomorrow or Thursday.

Thanks for the tag, Bennie! I've completed "Jessie's Meme" over at my site. Great look into your childhood, btw.

Me, too, with the strict Christian school experience. It was something, wasn't it?

That being said, BubTar is in Christian school. LOL!

What an interesting meme Benny!

I don't miss anything really from high school, except for the fact that it was a lot easier (academically) then college.

I'm pretty sure I'd just piss people off if I talked about regrets and misses at 25.
Yes?

we are so alike in ways ben but our lives growing up? completely different.

i'll give this a whirl...i'll letcha know when it's done.

good on Jessie keepin' you on your toes!