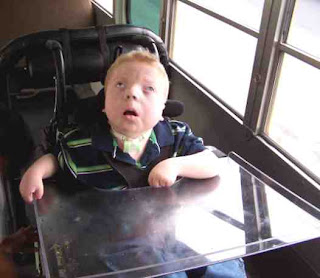 Get on the Bus


As I said yesterday even though Ben's first bus ride was rather uneventful for him it turned out to be a a rather emotional trip for Mom & Dad. And as was the case the other two days our son attended school last week, Ben had a ball! Literally. Friday is the day his class goes to the gym for P.E. We were thrilled to hear how much he enjoyed playing volleyball for the first time.


It was rather strange for me to start my day with the house so quiet. Lisa arrived at 7:30 and had Ben ready to go right on time. In fact the bus driver called to make sure everything was all set and to warn us she was about 5 minutes away. I walked downstairs to find Ben and Lisa already in the driveway waiting! I gave Nurse Lisa the camera to record Ben's first bus ride and thought nothing else about until about an hour later when one of my favorite persons in the world called.

Sue Zalewski with the Avery County (North Carolina) Chamber of Commerce phoned me about a matter related to the upcoming Woolly Worm Festival next month. We chit-chatted for a few minutes and Sue eventually asked about Ben. After catching her up on the past month's activities I told her Ben was taking his first bus ride to school.

"Are you handling this okay?" She asked. I kind of stammered around for a few seconds and said something like, "Yeah, why shouldn't I be?" She then replied, "This is kind of a big deal...I would think. You know, his first time going to school without you or Joan." Doh!!! Holy crap! She's right! I guess since it was so early in the morning my brain hadn't yet answered the opening bell.

After getting off the phone with Sue I called Joan. "So how are you?" All I heard in the background were a few sniffles. "I'm alright. Have you heard from Lisa?"

Yep, it had finally hit Joan too. Even though curiosity was now eating me up inside I told Joan I thought it'd be alright if she called the school to see how he was doing. But I did tell Joan to call me back and let me know how Ben was doing too. And she did.

The school secretary got a nice chuckle out of us and forwarded the call to his class. Perhaps Lisa can describe in the comment section the message she heard when Ben's class got back from the gym. Evidently Pam, one of the teacher's aides, got a huge kick out of it as well. After hearing that Ben was actually enjoying himself at school without having Mom or Dad along to protect him from the big bad world I had to call Sue back to let her know she had pretty much ruined my quiet little morning to myself.

Drats. Our little boy is growing up!

The photo was taken by Lisa on the way to school Friday.

"Hey Lisa, come over here." Pam played back the message from a slightly anxious Joan. "Just wondering how you guys are doing, how was the bus ride? You can call me back at work if you get the chance, if not...I guess we'll see you back at home this afternoon." Before the message was even complete I was calling to let her know that Ben slept through the AM bus ride, but was now wide awake and having a blast!! I even walked over to Ben and let them talk for a second, not really sure if that made things better or worse!?! When we arrived home Dad met us at the door and quickly removed Ben from his chair and held on sooo tight!

This is going to be an awesome year, and I predict that you all will see Ben do some amazing things by summer!!!

It's good to hear he enjoyed PE class too. Great to get him moving!

I remember when my youngest left for school for the first time..I cried for about 30 minutes and then thought hey! I am free for 3 hours! LOL...didn't take long to get used to it.

That's awesome. Way to go Ben, and everyone else. These moments are profoundly emotional. Thank you for witnessing them for us.