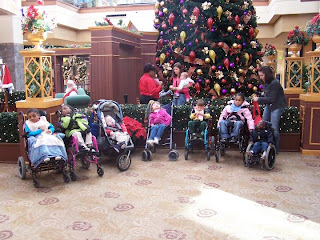 What We Did For Love

Some of you may recognize the post title. It's a reference to a popular song from the musical A Chorus Line. I guess I need to do that 100 things or 43 things or whatever to let y'all (such a wonderful Southern word) know a little more about me and Ben. By the way Ben is still asleep and for a change Joan's not freaking out.

I entered Furman University in the fall of 1980 as a drama major. Obviously I finished with a BA in Art (if you have read the profile) and in between got married for the first time, pursued a career in music, dropped out of college, got divorced, and got my ear pierced (which drove my dad crazy for awhile). I tell you this to let your know that I really love a soundtrack to a great musical.

An aside: if your want your own copy of A Chorus Line then buy anything but the movie version.

Me and Joan knew early in the pregnancy that Ben might have some problems. We thought we were prepared but parents can never ever be properly prepared for that special child that arrives no matter what. The world is turned upside down to say the least. In Ben's seven years our entire social network has changed. I can name several "friends" that we've not heard from in those years. If they ever read this I want them to know they are forgiven and we welcome you back into our lives.

My political agenda has changed as well. I was a typical white male Caucasian Republican (not card-carrying) voter who thought he knew the RIGHT (conservative) way and the Left Coast Way. And although I disagreed with much of affirmative action I had no problem with black folks. I've had several close friends who are black during my lifespan. In fact I can admit now (since my pa-in-law is pretty much computer illiterate and my deceased father knows better these days) that I even had crushes on two black girls back in my single days; one in high school and one in college.

Does that qualify me to understand the African-American experience? Of course not. I do think that having a challenging son makes me a minority though. A white man feeling oppressed. What a strange thing. Trust me, I will be getting to my point soon.

I was fortunate enough to grow up in a wealthy environment. Perhaps I'm paying my dues now? Anyway the lady I called my Second Mom was a black woman. She cleaned our house but our relationship was closer than that. Miss Estelle cleaned up after me and my slob brothers but her hard work is only truly appreciated now. To make extra money Miss Estell would stay with me and my brothers when my dad and mom traveled.

One night me and Cam got caught trying to sneak out on Miss Estelle. She laid the law down on us and deservedly so. In a selfish fit of anger I called her the N-word. She slapped me across the face and I deserved it. Nothing was said to parents...ever because I knew how wrong I was. To this day I feel it was one of the worst things I've ever said or done and I'm so thankful Estelle forgave me because I do love her dearly.

So I guess these are some of my points:

1. Don't say things in front of your kids you don't want them to recite later.
2. I wish I'd never learned:"the word."
3. I wish rappers or whomever to quit saying "the word" and retire it for good.
4. See #3 again.
5. I wish I had told my father that I was attracted to a girl that was really cool (she just happened to be black).
6. You can believe that Jessie and Ben are being raised in an environment that Dr. King once dreamed about.

Because of Ben I see the world now through colorblind eyes in regards to skin; along with the help of Justin, Najee, Malik, Evan, Courtney, Jasmine, Morgan and three wonderful lovely ladies that work with these children everyday. Thanks Doris, Sallie, and Kristy.

I agree with 3 and 4; My son is into rap music and he plays it over and over again. I've explained.
Like you, when he's older he'll understand better

an artist on the edge said...

if only more and more people here "down south" would take your view of things...
coming from the west, i was really kind of shocked to still see the animosity between white and black and the haves and havenots. One would think in a world that is truly a melting pot nowadays, people would be able to lay aside their "sorting bins" and enjoy eachother's company on earth ('cause i'm pretty sure the afterlife won't be colorsorted either...).
i wish for my girls that they will be completely colorblind for skin color and see people as they are in their hearts, and not what their outward appearance would dictate. they are getting pretty good at it, hopefully they will continue in that direction - it will make the world just a tiny bit better of a place.

I know there are Southerners who would disagree with us but the racial divide is still a wide gap. It is definitely better for our generation and I can already see that Ben and my daughter's generation will go a long way towards bridging the gap.

When Ben and I adopted each other, I was completely naieve about race. I thought love would conquer all. We've had some ugly experiences. I can tell you though, please don't wish for a colorblind worlds: we are all so many wonderfully different shades. I love Ben's skin, and he looks at my gray, fine hair, and he loves it, I can tell. Let's celebrate our differences and the richness of life. Then let's set about creating a world where we welcome differences and enjoy them. Welcome to the human race, glad to have you!
Peae, shalom, salaam,
Cindy

Just someone stopping through. I know about your blog through a girl at a Christian website I belong to and I just HAVE to say, as an African American woman THANK YOU!!!!!!!!!! Eh, we have all uttered a racial slur or two, but you know what> In the end as long as we acknowledge and TRULY know that it's wrong, that's all that matters to me. God is a God of forgiveness, so who are we to hold grudges? Your blog on this subject warmed my heart. It seems you were raised a little racist ( as I was too and if i hear one more "white man, black man" phrase I promise I'm going to vomit!") But it's whats in YOU that conquered your heart. Thank you for that! 3 and 4 needs to be a LAW! Why not ban this word and bury it?!?!? It's not fair to say that only I am allowed to say it because I'm black! I have totally forgiven Mr. Richards as I pray others will too. Life is too short to dwell on somthing someone clearly feels bad for saying!

Anyway i'll end this by saying Thank you again!