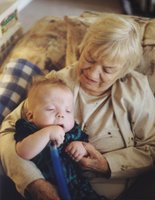 Top Ten Things I Will Hate Missing Because of PKS.

I know things aren't set in stone and Ben has already surpassed many milestones "some experts" told us he'd never reach. However we sometimes have to be realistic. Not only is it bad enough to grieve about things we've already missed out on but it is inevitible that parent of an exceptional child peers into the future and grieves over things we'll miss in the future. Here's my list for the future.

1. Help dressing my son in his first tuxedo on prom night.

2. Being his best man in his wedding.

3. Teaching him how to grill a steak.

4. Teaching him how to hit a baseball.

5. Teaching him how to play golf.

6. Showing him how to tie a necktie.

7. Showing him how to drive a car.

8. Watching him learn how to ride a bike.

9. Backpacking in the mountains.

10. Playing toss in the backyard with a baseball or football (this one really hurts).

The above photo is Ben's great grandmother visiting him in August of 2001. She was affectionately known as "Green-Green" and they both had a special bond with each other. Green-Green passed away in early December of 2001. At the time they were just around the hallway from each other at Greenville Memorial Hospital. I will always believe that Green-Green left this world to comfort Ben when he was so sick that month and kept him from going to the next life.