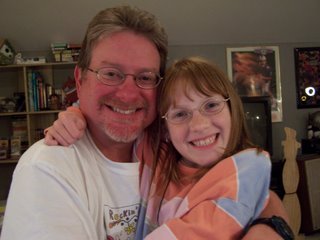 I feel compelled to introduce the readers to a little bit more to Jessie. It is difficult for me to know where to start. In fact I could create an entirely new blog dedicated to her wit and antics that could keep you very entertained.

My daughter took her time arriving on the scene back in 1997. In fact she was two weeks late, a fact not lost on me since we lost that child credit deduction the following year. That part is still an inside joke but the wait was well worth it.

From the very beginning me and Joan knew we had an incredible child. We had already heard the "horror stories" of infants not sleeping, the croup, eating problems, etc. You name it and all of our friends had already described it to us.

Jessie was a GEM to take care of! I honestly can remember those fond moments of feeding her in the middle of the night. I cannot recall a time that she didn't fall back asleep so deeply that we had to awaken her for her next feeding.

Fast forward a couple of years. There are pictures of our family on Christmas Day 1999. To say that it was a strange day for me and Joan would be like saying a "caped crusader" is strange thing. Quite obvious. Jessie did not like being at a hospital for her brother's first Christmas but she accepted it like a child twice her age.

Jessie has always put her brother first in everything she does. It is absolutely amazing sometimes. Obviously her friends have been reluctant to visit with Ben when Jessie gets home form school. Jess pretty much "forces" her buddies to embrace Ben and say a few encouraging words. What a cool kid!

All of Ben's nurses (along with Mom & Dad) have noticed that when Jessie is due to return home Ben is always fixated with the front door. Me and Joan can try to comfort Ben when he's sick or mad. Jessie can actually do it. It actually happened (again) last night.

The bottom line: We have two "special" children. What a cool thing to face! We could not have made it this far with Ben had it not been for Jessie. That is the honest-to-God's truth. I'm so proud of both of my children and Jessie usually gets the short end of the stick. I hate that it happens that way but one day Jessie will reap her reward! After all, she is the best daughter a dad could ever have.

Aww Bennie that is soo sweet. I agree that Jessie is a great child. I only hope that Haylee will grow up to be as great as Jessie. I missed my Ben today by the way. I hope all was well. See you soon!!!
Vickie

You have such a WONDERFUL family! Each one of you have "climbed mountains and swam oceans" over the past years. Your endurance and positive attitudes are a light for the rest of us to follow!

Jessie is an amazing, beautiful, young lady! Even at this young age she has earned my admiration!