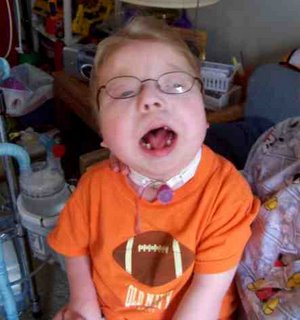 First off I think there is a virus on our network here at the house. I'm going to blame Crouching Mommy, Hidden Laundry's husband for this soon-to-be epidemic. It is a known phenomenon, as set in stone as Al Gore invented the internet, that if you visit the blog or website of a person/family/cult that has some type of crud/virus/plague you and your own family will soon have it.

What began as the sniffles yesterday has turned into a strep test for Jessie today. Thankfully Jessie's pediatrician who also serves as Ben's Fluid Guru says it's just a virus. No biggie. Right. We'll be seeing you again next week, Dr. Flanders. "Keep Jessie away from Ben" he says. That would be like telling Kate Winslet's character in Titanic to leave Leo D (as he is known in this household) handcuffed to those pipes in the bowels of the ship as it's sinking. Ain't gonna happen.

Which leads me to my next thought: what is with Ben's Jessie-worship? I'm listening to him right now unload to Jessie about his day. He's barely spoken to or even smiled at me all day. It was his Mom's fault! Oh yes, I'm jumping ahead of myself here. Details a bit later. Still this brother-sister relationship is pretty awesome...and a mild reason for Mommy-Daddy jealousy around here. After all it's Mommy bringing home most of...okay practically all of the bacon these days and Daddy frying it...okay eating most it. In fact Ben still ingests that God-awful vanilla crap. Could that be the reason he likes his Sissy more than me or Joan?

Okay, about last night. I'll try to put this into a nutshell. Okay, I can't. Let's just say that because of Ben (yeah, let's blame him) we have a VERY WEIRD sense of humor around here. I mean gross stuff just has to be really gross to merit a weak stomach around here. That or an airplane flight to Louisville, Kentucky. The airplane flight wins every time.

So Ben has (oops, had) this loose tooth. It's been bugging him since the weekend. It's been bothering my wife longer than that. Now I think we need a little background here. I can honestly say Joan really missed her calling. I can't go into details but if I told you what she did for a living I'd probably be poisoned by some rare form of radiation. Let's just say she works for a bank. We (meaning Ben's nurses, her family, close friends, and most doctors we've encountered) now realize after seven plus years of Life With Ben that Joan should've been a nurse. She has encountered every body fluid available to mankind and has yet to find one she is uninterested in or chosen NOT to show me and Jessie. In fact let us call a spade a spade and refer to Jaon as Fluid Guru Too.

So Dad goes to kiss Ben goodnight last night and encounters Fluid Guru Too hovering over Ben's head with a pair of forceps (God's gift to Fluid Guru Too). Jessie (playing the part of Nurse Grossness which is always her role) is postioning the flashlight.

Ben shows off one of his "vampire teeth." In fact notice them in the pic below.