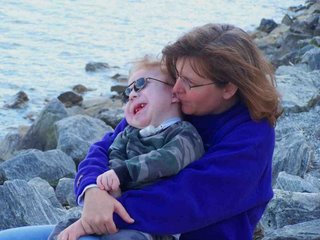 Ben recently visited the Shriner's Hospital here in Greenville, SC. For most of Ben's life we were told by orthopedists that he would never be accepted by the Shriners because of his "medically fragile condition" and the fact that Ben already receives financial help through Medicaid. Given those situations several possible surgeries have been breifly discussed but nothing serious.

The medical problem.
Some of the symptoms of Pallister-Killian Syndrome include lax ligaments around connecting bones. If you become queasy at descriptions of what can be considered gross then skip this part. We can actually bend all of Ben's fingers backward so far that the back of his fingers touch the back of his hands. About 75 percent of the times we pick Ben up by his upper body we can feel (and hear) his arms pop out of joint. Essentially his arms breifly dislocate and then pop back into joint. To this day Ben has never shown any visible signs that these events cause pain.

However, until last winter his lower body functioned in an opposite manner. In stretching his legs out (which we do many times a day) we would see distress when we concentrated around his knees. Evidently his ligaments in this area are very "tight" along with his hamstrings. The joints connecting his femurs to the pelvis is much worse. In therapy sessions he would always show discomfort when we applied pressure to these joints.

On top of that Ben has an abnormal shape to his pelvis and left femur due to the discomfort. When he is sitting comfortably there is a noticable sway to his body - almost a "S" shape. This occurrence is quite common for children that cannot walk or learn to walk at an advanced age. Obviously the situation happens because of a lack of normal muscle and bone growth.

The Change.
Sometime in the late winter Ben suddenly stopped having so much discomfort around his hips. He went from having a difficult time being strapped to his stander for less than 10 minutes to lasting up to 45 minutes in a standing position! After a few weeks of therapy we (parents, Vickie, and his therapists) realized the femur was doing the same thing as his upper arm; dislocating and then sliding back into the joint.

Joan set up a visit to meet with his orthopedist and Ben put on an excellent show! He talked, smiled, laughed, and even tried to roll off the exam table. A recommendation to Shriners was mailed the next day.

The Future.
Like most things in Ben's life we're back to "do we or don't we." The folks at Shriners had nothing but positive things to say about Ben's care and the aggressiveness that we've sought for his therapies. Unfortunately their opinion is that performing any surgery now could possibly cost him his life. The doctors say he would survive the actual procedure but that the complications that can happen afterwards is the scarey part.

We have no idea if Ben will ever walk but all along our thinking is that we are at least going give him a fighting chance. We just don't want him to suffer pain by our methods to get him there nor will we take a chance on losing our son. We've gotten quite used to wheeling him around.

There were some good things. First the hsopital will continue to monitor Ben's growth. We will go every so often for x-rays so we can all assess his situation as he grows. Ben has already progressed further than many of his initial "experts" predicted. Secondly we were told not to worry about the hip pain for many years to come. More than likely that situation will change in his late teens and there are plenty of non-invasive procedures we can look at that time.

So, as always, we stick with the program we've had since we brought him home: work hard, play often, and pray constantly.

Pictured is Ben & Joan on a camping trip to Devil's Fork State Park in March 2005.

Thank you for this update! I'm glad to hear that hip pain doesn't seem to be a concern at this time. As usual, you are making incredibly wise decisions and are thinking first and foremost about Ben. Count on me to continue to support you in prayer (. . . and in the working and playing as well. . . )
Love,
Miss Kristy

Ben is a truly special little boy. When he smiles with those big cheeks his entire faces lights up. Ben has had some tough times in his life but, boy, is he a trooper. He is an amazing example of the courageous spirit of children. Through almost everything he has a smile on his face. I have no doubt in my mind that one day Ben will walk. It may not be for a few years but I truly see the potential that he possesses. I hope Shriner's will continue to offer words of wisdom for Ben and his family, and myself. I have been blessed to have been a part of Ben's life. I can only hope I have touched his life as much as he has touched mine.
Love,
Ms. Vickie (Ben's Nurse)