A Week of Thankfulness - Day 1 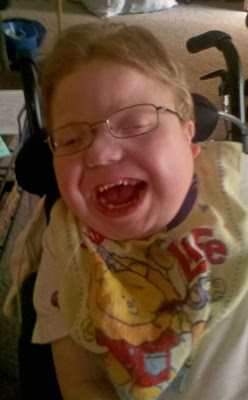 He is a wise man who does not grieve for the things which he has not, but rejoices for those which he has.
-- Epictetus

When I thought up this idea (given that many folks on Facebook are posting all 30 days something they are thankful for, I wouldn't say it's a great one) of blogging each day the week of Thanksgiving, I didn't anticipate that it would begin with Ben coming down with a virus that currently has him teetering on the brink of a hospital stay. Given that visits these days to the Children's Hospital of Greenville, SC are as frequent as snow in the South, a thankful heart this does not easily make!

But even with the not-so-terrific situation we currently find ourselves in I cannot ignore the words written above by the Greek philosopher. Even though Epictetus believed all things were determined by fate he also believed we were responsible for our own actions and by not accepting our lot in life by doing the best we can under those circumstances, we would indeed bring suffering upon ourselves. What makes the above statement even more remarkable is that Epictetus was born a slave and somehow became crippled during his childhood. His philosophies continue to influence modern literature, acting, and psychology. In essence this lessor known Greek educator did not allow his outcome in life be determined by things he didn't have...like freedom and health!

In thinking about this further perhaps this is the perfect day to be thankful for having a son just like he his; with Pallister Killian Syndrome, compromised lungs and asthmatic tendencies, lacking muscle control and communication skills, needing 24/7 care by watchful and guarded eyes. This is what Ben is to most that meet him. But for those that spend any amount of time with him, Ben is nothing short of being a remarkable human being.

Ben is a fighter. He is determined and absolutely relentless in the pursuit of a healthier and more normal life for not only himself but for his family as well. He has not only beaten the odds, he has flat out lapped the field and quite literally kicked his "opponents'" ass!

Ben is courageous. Like all of his other PKS brothers and sisters (or any other exceptional child for that matter), he willfully faces daily challenges that would defeat many adults. Truly I have been awed by his strength on many, many occasions.

Ben is an artist. For those that are regular readers here you already know of his penchant for painting but Ben's gift goes well beyond that. He is the best of artists in that he not only attempts to interpret his world, he makes his world better by his work. That is not only illustrated via paint and colorful fingers but also through his charm, his smile, his touch, his unconditional love.

These are just a few obvious characteristics Ben has brought into our lives. To us he is not a broken person who we need to fix. To those of us that are privileged to spend a great deal of time with him, Ben was brought into our lives to fix what was broken inside of us. I have said many times that Ben is as close to God or Jesus as I will ever get in this life. I am so very thankful I have the opportunity to experience that gift any time I choose to.

I love this, Bennie!

Why thank you, Kyla!

We are made as ignorants without the light of day,
finding knowledge of self,
when we find the way.