Ben went back to work yesterday after a lengthy sabbatical. Needless to say the painterly skills he has learned came back quickly. It's like riding a bicycle now!

Seriously Ben is amazing to watch. I've included a short video from yesterday as well. Not only is our son getting bigger but his images are getting more developed and complicated. He worked on four canvases yesterday, completing two. I plan to leave both of those alone because both have imagery that absolutely amazes us!

It is obvious that the blessed receiving of the HP Touch Smart Computer has been an influence on our son. There are moments that we are just overwhelmed at what Ben understands and wants to achieve - that has been made clear to everyone working with him since he received that wonderful gift. I promise to update more as we adapt his equipment so that he can use it more proficiently. Once again, we cannot thank Casey and The Moosh enough! 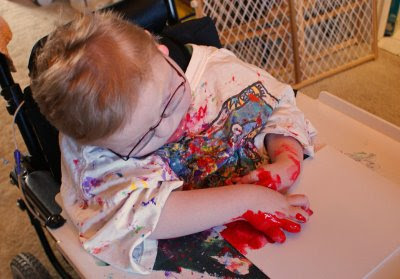 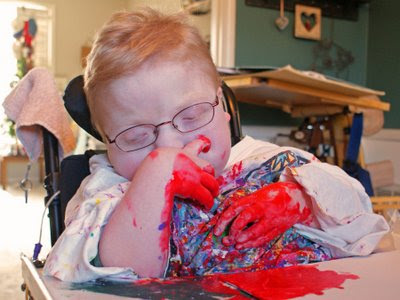 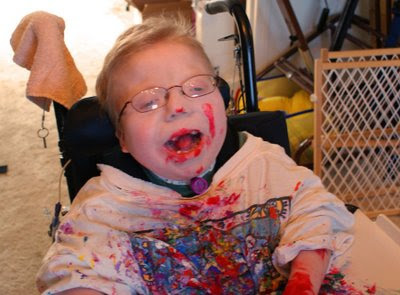 Another idea with a red nose! 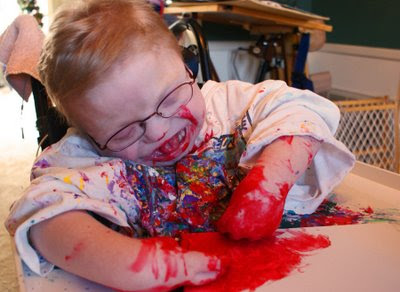 ben really gets into his work.
how long does it take to clean him up after he's done working and creating masterpieces? LOL!

I can't wait to see what he (and you) produced!! I didn't know you got a touch screen--those are cool...I want to hear ALL about it!

Flutter - Vicki sent a pic to Joan on her cell. She wrote back that he looks like Chuckie II. And...

Gert - She signed that text mess as "Mommie Dearest!" I also say "No wire hangers!" a lot here!

KK - A long time! Days even. Joan will come home from work and know he's been painting.

That's so cool!
Do you guys ever do water therapy? Just thinkin you could kill two birds with one stone. LOL!

He really is a joy to watch, Bennie! Even though I'm a different type of "artist", I still feel very inspired watching him create. :)

Love to watch the young artist in action!

He makes me want to go get messy with the paints!
Go Ben! You can't keep a true artist down, can you?