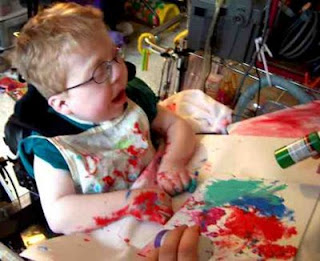 Considering where he was less than 7 days ago Ben is recovering rather well. We do know that he's feeling many of those same descriptive words as the rest of us. For some reason he's not been "talking" much since he's been home. For those of you who are new here you might want to click on the video of him singing last week to get an idea of what our boy typically sounds like. There are a few other weird little quirks that seem to be brand new but none of them seem dangerous; odd maybe and worth keeping at least one eye on which is something most of you moms have an incredible talent for.

Tomorrow, unbeknown to Mom, we'll be taking a big step by taking him to therapy. My feeling is that the quicker we get him back into his routine the better. Joan has already made the call that he's not going back to school until after Christmas. I think that is a little drastic but she's the one who baked the kid and deserves to feel somewhat at peace while she's at the office every day.

A good break for Jessie came early this morning when her bus didn't show up. Mechanical difficulties made her ride to school late for at least an hour & a half. Using the excuse that there was no other way to get her there Jessie spent the day relaxing with her brother. Joan and I both agreed that the timing was perfect. I found her passed out on the couch around lunchtime. She too lost a weekend of rest.

I gotta give some props to several bloggers who really got the word out about Ben. Kyla, Maggie, and Brian are just super folks! Even though they pen three of my most favorite blogs I know their true gift lies within their hearts. That is what makes them very talented writers. I've really enjoyed exchanging some behind the scenes e-mails with Brian. First the guy must have a gazillion readers because I checked my site meter today and they all came from Looky, Daddy. Second, I'm certain that I've now convinced him that I didn't call him a dirty name and that I indeed have a friend with a name that rhymes with Smuckers.

Please come back and visit tomorrow. I have some "magic" to share with you! Two more favorite bloggers are running contests that I will tell you about as I expound on how I would share their magic!

PS - If you've not gone by and done so yet, please stop by and leave some love for Kelly. Check out yesterday's post for more information. I really would like for all of us to brain storm and come up with an idea that would really lift her spirits; something we all could contribute creatively, financially, and lovingly to. E-mail me if you have anything - any sort of idea.

I am thinking of you and your whole family. *hugs*

I totally understand Joan wanting Ben home. I've had some minor things (nothing like what you've been through) happen to the kids here and there and that's always been my first instinct, to just keep them home no matter what anyone else has to say about it. A mama's gut is a powerful thing.

I can't imagine how weary you are. I'm just so relieved things are relatively okay.

And I got my beautiful holiday cards! My girls wanted to know who painted them and I showed them the video of Ben. They were pretty impressed. :)

Tell Joan that I'd be keeping KayTar home, too. It is just a couple of weeks, and his little body needs some extra rest and cuddles (and avoiding more germs won't be a bad thing either), I think. Hopefully by January he'll be raring to go!

Glad you guys got a kick out of yesterday's post. The potty thing is brand new for her and while I was feeding her she said, "I need to potty!" So I ran to get it for her and plopped her on there and the moment just struck me as hilarious.

Ummmm...yeah...Basspole is old family name. And on my dad's side there was a family named Donavastich.

Found you via Kyla and Maggie tweeting about you...