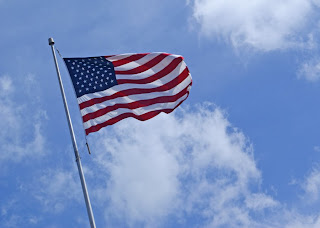 There's a little more swagger in my walk today. I'm smiling more today than I have recently. Things that have been getting on my nerves lately seem to be less noticeable. And there's a perfectly good reason why I not only feel this way but why millions of others in our great nation are walking with a little more giddyup in their step. We all voted!

And I may be going out on a limb here but I honestly don't believe the electricity I felt waiting in line today has much to do about a supporting specific candidate. Personally my belief is that the excitement surrounding this election is two-fold. No matter which candidate wins history will be made. My daughter will grow up knowing that she actually could become the Vice President of these United States of America. My black neighbor's son, should he pursue that path, will know that the office of President of the United States is obtainable by a person of color. This is perhaps the most significant election in which we will participate during our lifetimes!

The second, and possibly the more important current issue, Americans are finally taking back the power to control our own destiny. No longer will we allow special interests and lobbyists to influence our elected officials as they have done the past 8 years. They are elected to serve our interests - not those with the most money! We the people are standing up today and letting Congress know how our government should work.

I don't care if you are an Obama or a McCain supporter. Know that change is coming. Because we stood in line today to take part in our duty as Americans. We expect better and demand it!

A very funny aside: Jessie asked Joan earlier how they announce whose the next President. Her so very innocent and hilarious question: "Do they do like American Idol and hold hands before the judges make the announcement?"

My darling, we can only wish!

And wouldn't the world be a better place if they did!! Jessie--I vote you for Pres!

It was a good night (miserable post-op kiddo aside). Historic.

What an amazing couple of weeks you've had, Bennie. So many ups and downs.
I'm so sorry to hear about what happened to your hard work at Holden Beach, but I'm glad you've got your little man there to help keep you on an even keel. What a fantastic costume. I might steal the idea for next year.
Colleen and I miss you and we're sorry we keep missing you. Let's definitely make plans to get together some time, perhaps when your show season is over and things quiet down.
And wasn't last night amazing? We hosted an election night party and there were plenty of cheers, tears, high-fives and hugs going around.
Can't wait to see you, Ben and Jessie again and can't wait to meet Joan.