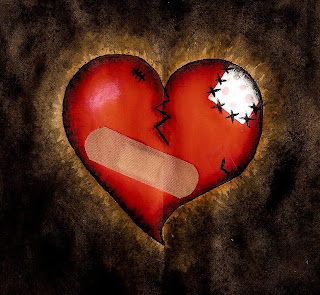 I feel safe in guessing that most everyone reading this blog who is 25 years or younger recognizes the title as a song title as well. Garth Brooks had a huge hit with it way back in 1980 something. I forget the year which is not important. What I do remember is that verse that cites a "reunion" of two high school sweethearts at a football game. After their meeting the protagonist snuggles with his wife and which leads to him to the words of the chorus: sometimes I thank God for unanswered prayers.

Via this blog I've had several opportunities to reunite with many people who are a part of my past. It has been a treasure to look back and see how these folks have helped me chart my life's course, some in ways that were intended and some that were not. Without a doubt in each case it was never my intention to lose touch with them. Life happens. Couples get married and their lives begin to revolve around their own families. Jobs have carried some away to distant places. Or that phone call I plan on making gets put on the back-burner until it's completely forgotten.

Through the internet I'm rediscovering old friends, teachers, and loved ones. We can correspond at ease knowing that our separation just "happened." That would be the excuse for all of them with the exception of one. And who could blame me? She just happens to be my first wife. My ex-wife.

Life in a Vacuum
When you are young it is easy to make mistakes and quickly recover from them. It was 25 years ago last month that Cathy and I were married. I wouldn't turn 21 for another 2 & a half months and since she was a year younger, I would have to illegally buy her adult beverages if she wanted a beer or wine.

As a teenager Cathy endured a traumatic family tragedy. The details are unnecessary and honestly it's none of my business to discuss it because it happened before I even knew her. Plus I still respect her privacy too much. Perhaps one day she'll talk about it on her own blog. But because of the situation I always attributed her quiet shy demeanor to her past misfortune.

Because she had so very few family members around my family became hers. She became the daughter my mom had always secretly wanted. Those couple of years before our marriage she was a fixture at all of my family's holiday gatherings. My grandparents, aunts, uncles, and cousin all accepted her as a part of our own. It was a given that we were supposed to get married one day. And so we were.

My parents set us up in a small farmhouse in town. I went to work for my dad while she found a job as an administrative assistant. Life was good... or so I thought.

Betrayal
Eventually Cathy found a better job that gave her the ability to climb the company ladder just a bit more. I had started back to Furman so my schedule got pretty tight. Her office staff would often congregate after work together which suited me fine. I used the evenings to study and occasionally joined her friends for a cold one.

I noticed Cathy's personality changing. She was becoming more outgoing, choosing to do a lot of things we used to do together on her own. I was honestly pleased by this because I had just made the transition into the fine arts program at school and was spending more time out at Furman. We began discussions about trying to have a baby and in fact she went off the pill in the fall of 1984.

Condensing a long story into a short one, we began having trouble. Our relationship started unraveling. Cathy had suddenly become cold and distant. She was spending way too much time away from the house including one girls night out that she didn't come home. This was long before cell phones so I had no idea where she was. The next morning I watched as one of her girlfriends pulled into the driveway and parked. I could see them talking and it seemed like another hour before she entered the door. Cue the biggest fight we'd ever had.

In early April of 1985 I flew to Detroit for a recording session with my songwriting partner. While I was there it seemed Cathy would call to check on me just about the time I would normally call her. When she picked me up at the airport after my return flight I knew something wasn't right.

Later that night she told me she wanted to move out. I left for awhile and went to my parents - we were all just devastated - I didn't want her to leave. In the middle of the night I went back to the house and begged her not to go. When I got home from classes the next day her stuff was gone. We exchanged phone calls at work the next couple of days with the hope that I could get her to come home so we could work things out.

A few days later I got our monthly phone bill. While I was in Detroit she was calling me from another number and I knew whose it was: a co-worker at her office who was divorcing his wife. Against the advice of my parents and attorney I confronted her a few days later. Sitting in our den Cathy admitted to the affair. It was as if she wanted me to catch her so she could take the fastest train out of town. We were divorced July 18th, 1985 exactly one month after our second anniversary.

Forgiveness
In August of 1992 I got a phone call at my office. It was Cathy. She was in town to visit relatives and asked if I knew a particular contractor to do work on a relative's home. We made small talk for a few minutes, said farewell, and hung up.

For the past year I had been attending an Episcopal church but more importantly, I had been in a train-wreck of a relationship more off than on with a young lady the previous 5 or 6 years. Earlier in 1992 I went through counseling with my priest and after a few sessions she told me that to break free, I needed to forgive this girl for what she had done to me.

Holy Week in an Anglican church is an incredible time. To say the least it is very emotional and quite moving to participate in services to commemorate the seven days of Jesus' entry into Jerusalem until his resurrection. One of the rites some choose to participate in is a reconciliation service. The best way to describe it is that it's quite similar to confession for a Catholic. Essentially it is an opportunity to reflect upon something, someone, some event that is preventing you from a closer relationship with God, and most of the time from moving on with life.

I'll never forget as Mother Anne prayed with me that Saturday morning. It was excruciatingly emotional and most of it is still a blur, literally. I had my entire focus on this ex-girlfriend and wanted to be free of the mess we had made of each other. Mother Anne finally asked, "Who is it that you need to forgive and who is it that needs to forgive you? I looked up at her with hot tears streaming down my cheeks and replied, "Cathy."

Come back for part 2 tomorrow. I think you'll discover a different end than you might expect.

To be continued? Aw, man! Well, looking at the title, I can't say you didn't warn us.

Ooooh, call me nosy, but I love hearing people's stories, lives, etc. Can't wait for tomorrow. Thanks for sharing!

Brian, I had to have a hook to get you to come back. I don't write as well as you.

Gerty, you know my life's a soap opera.