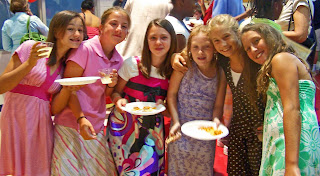 And so the celebration began. I was so unprepared for the emotions running through my heart and soul the next hour or so. Just a few minutes before I was thinking how humorous it is to have an elementary school "graduation" and how bored I'd probably be. It's funny how many times I have had the same thoughts about attending one of these school functions only to have the memory etched into my mind forever.

Awards were handed out, mostly for academic achievements and we were so very proud of Jessie. She collected her fair share of things that now need framing but it was very surprising to also see how well many of her classmates performed during the year. As parents it was a marvelous realization to know our children had attended one of the best schools in the upstate of South Carolina.

After the graduation the fifth graders and their families gathered in the adjacent hallway for some snacks and one last gathering as Pelham Road All Stars. Over the course of Jessie's time at Pelham Road the school had been remodeled and partially rebuilt. Making a long story short several parents decided to meet their kids and walk to their homes (or cars) rather than brave the lengthy car pool line. This made for the the beginnings of the Side Door Mamas.

Being a stay-at-home dad I was sort of the adopted mascot of the group that gathered every weekday at 2:20 PM. Even though we only spent about 20 minutes with each other each afternoon we all became great friends. And even better, our children became great friends. I guess the saddest part of this farewell is the knowledge that many of Jessie's core group of friends will be attending different schools next year. The Lindahl twins move on to Riverside Middle School. Little Rachel will attend League Academy. And Catherine will join her older sister at Beck Middle School.

The most difficult of the changes will be Jessie's separation from her very best friend, Bailey. She and Jessie met at "Meet the Teacher Day" shortly before entering K5. Joan snapped a photo of Jess with Bailey and her teacher, Miss Wall, shortly after they were introduced to each other .They've been attached at the hip ever since.

It is no exaggeration that the two of them have spent at least two to three afternoons a week playing together for the past six years. And that doesn't include the weekends that one of them is spending the night with the other. Bailey's grandparents live less than a block from us and have kept her after school during that time. When I am away on Fridays it's been a given that Bailey's grandfather would pick up Jessie from school. Folks, we're talking about a neighbor...nay, a part of our family attending another school this fall since our "other little girl" enrolls at Northwood Middle School.

My emotions probably reached their pinnacle when Miss Wall came to the podium to hand out some of the awards. In the end there was nothing funny or humorous about yesterday. It was as if someone had taken a baseball bat and whacked me on the head to get my attention. Changes are here. Big changes! And it hurt.

Obviously I realize how big a step Jessie has taken toward her future. I can spend the next two months and a fun summer ahead absorbing that fact. The Side Door Mamas have plans to make sure we and our kids keep in touch which is also a good thing. And not all of Jessie's circle of friends will attend somewhere else besides her school. So the sadness must end. But I can't help and sneak back to those two tiny little girls meeting for the very first time...for some reason my nose is runny...I'm gonna need a tissue. 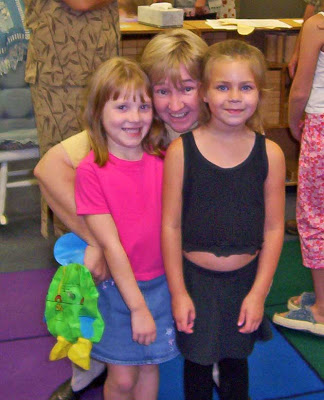 For the record the two girls in the middle of the upper picture are Jessie and Bailey yesterday morning.

it sucks that they grow up.

Awwww. I'm having similar pangs about my BubTar turning into a first grader. Although junior high is a WHOLE new world and I'm already dreading it. LOL.

It's a bittersweet moment indeed, when we realize just how fast our babies grow up. I'm so glad you went to that graduation. Here's to many more graduations to come!