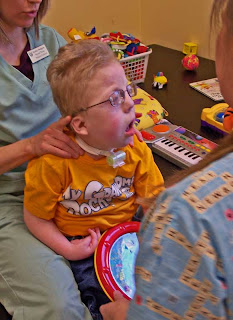 Obviously Ben is not an adult quite yet. He's got many years ahead before anyone would consider him as such. But today was one of those days I was reminded that he's definitely a young man.

The term manhood can mean many things. An adult male, a teen aged boy coming of age, taking on adult responsibilities, or even becoming a father. I haven't checked Webster's but I'm certain you can conger your own images to define what manhood is all about.

Thursday is therapy day for Ben. Although he gets other therapies at school during the week (mostly on Wednesday) today is the day that Nurse Stacey and I take Ben to a place down the street for pretty intense workout.

Ben was an absolute ball of energy this morning. Stacey is real good at preparing him for his visit by telling him where we are going and urging him to work hard when we arrive. For some reason this really excited him today and it truly paid off! The three therapists working with him, along with me and Stacey, agreed that this was the best session yet. It was amazing to see the progress he has made over the past few months. As a father I couldn't have been prouder had he hit a ninth inning game-winning home run. This was far more important than any little league game.

That is not to belittle those things other children accomplish. It's just that Ben really gets it. The kid wants to sit up, walk, run, and play like any other child. But Ben is different. He has had to pay a huge price just to get to the place he is now.

There are days that he is soaking wet from sweat after he finishes with therapy. That's the kind of thing you see at a gym after a physical workout which is exactly what Ben has done. A workout. Just to be able to sit up on a his own little fanny.

This afternoon we took him to the surgeon who put in his feeding tube so we could switch it out for one that will be easier to maintain. The whole family ended up in attendance. Essentially the old tube had to be yanked from his stomach via the 1/4 inch whole near his belly button that serves as a port. It was heart-breaking to see and hear him scream once it happened. Jessie in fact nearly became hysterical in trying to ease her brothers pain.

It was one of those moments that I will carry with me for the rest of my life. Ben looked up at Jessie and saw her fear. Immediately he began to smile. You could still see the tension in his face but calming his sister was much more important to him at that moment than dealing with the obvious pain he was feeling.

Both of today's appointments clearly illustrate why Ben is my hero. Ben faces challenges everyday that seem somewhat trivial to those who might not understand the life of an exceptional child. Yet he still accepts those trials willingly and with incredible determination. He has also endured more than his fair share of pain. Yet in the midst of it he can reach out to those he loves to ease their fears and let them know that the experience will pay off in the long run. If those two qualities don't make him a man I don't know what will.

WOW, what a story! It's amazing how much he sees and knows despite not being able to always communicate it.

I can see why Ben is your hero!

He's such an awesome guy.

Watching our kids work for things that are so easy for others reminds me of my first asthma attack. I remember thinking, "I've never even thought about breathing before, but now I'll never forget what it is like to have to fight to get air in my lungs." It's like that...after you see what it takes for them to achieve something, it just can't be taken for granted any longer, no matter how normal it seems to other people.

Oh! You have me laughing through my tears right now!
You guys, Ben especially, are such an inspiration to me to never take life for granted. Regardless of our abilities, we all can give love and comfort to each other.
I think he's my hero too now!

Truly good qualities he's got there. That's some maturity on his part.

oh you made me cry.

bless his little heart. he's such a sweet lil guy worrying about his sister.

his little arms look so soft in that picture. you know what i mean? like with babies and they have all that extra fat padding. he's so sweet.

I love that he comforted his sister despite the pain. That's big boy stuff for sure.