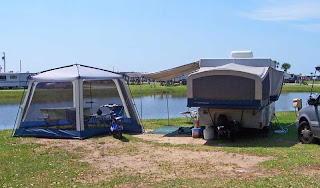 We've been away for a few days of sun & fun. Well almost all of our family. Joan and the kids used my first Myrtle Beach Art in the Park weekend as an excuse for some much needed R & R. I have to admit that even though it was a work weekend for me it was great to have them along.

Despite some rather disappointing sales (we still made money and paid for the trip) the weather was perfect, the reunion with my beach artist comrades was quite fun, and Ben probably had his most enjoyable camping experience to date. Usually after a weekend crammed together in a pop-up camper we're all ready to get home. Not this time!

The biggest news came Saturday morning. My closest "carnie friend," Christy Buchanan called to inform me that she will featured in Southern Living magazine some time in the coming months! I think I expressed it best when I said, "Honey, you just hit the artist lottery!" For those of you not living in the South let's just say that Southern Living is to a Southerner what The New York Times is to a Donald Trump, what The Farmer's Almanac is to a farmer, what The National Enquirer is to Britney Spears, and what Martha Stewart Living is to...well...Martha Stewart.

We're all still in a bit of a shock around here. And as Joan told me, it couldn't have happened to a nicer or more deserving person. Christy has been through some rough times herself the past two years so I can't wait to post the link to the article.

Hopefully I'll be able to catch up on my blog reading over the next few days. Despite having a one-day show here in Greenville this Saturday (read about that here tomorrow) I won't be traveling again until late next week. I hope all is well in your lives. I look forward to catching up with what's happening around the blogosphere!

good to hear y'all got to get away for a weekend. it's always good to regroup and be together.

i miss southern living. i use to get that magazine all the time when i lived in georgia. had the best recipes in it.

congrats to your friend too btw. would be great if she dropped your name huh? tell her that.

glad to hear you all got some rest - and no sick kids during vacation, yay!
Cool Beans for Christy - I can't wait to see the article...hopefully it will bring tons of good things her way. Tell her I said hi - sure miss hanging out with you all...

Sounds like you all had a good time! Glad you got to be together- it s great time of year to be camping! I wish the show had been a little more lucrative for you, but at least it wasn't a total bust, right?
I gotta go check your schedule and see when you'll be nearby...!

Sounds like you all had a good time! Glad you got to be together- it s great time of year to be camping! I wish the show had been a little more lucrative for you, but at least it wasn't a total bust, right?
I gotta go check your schedule and see when you'll be nearby...!

Glad you had a good time!

I spoke at the state Capitol yesterday and I'm in the papers! That's my news since you've been gone. LOL.