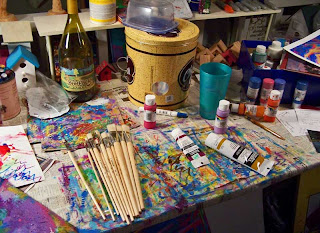 On the Palette: Painting, Panicking, and Pink Eye.

Medium Magenta: That is the color of Ben's left eye at the moment. I'm still amazed at how quickly that little virus turns one's eye(s) from normal to bright red. In Ben's case it was less than a half hour.

Nurse Stacey and I were preparing to take the little guy to his weekly therapy session this morning. In fact we were pretty psyched since Ben came off his steroid yesterday and was back at Full Ben Speed. The expectation was for an awesome visit with his therapists given all of his smiles and rough-housing earlier.

My mom stopped by for a quick visit right before we left and asked if that particular eye looked swollen. Neither Stacey nor I had noticed anything strange all morning but sure enough his eye looked a bit puffy. Having my own allergy problems at the moment I was hoping this was a minor allergy issue. To be on the safe side I went ahead and gave him the prescribed eye drops.

By the time we unloaded Ben and his wheelchair into the lobby of our therapists his eye had gotten progressively worse. We're talking perhaps 20 minutes from the time my mom noticed the swelling until the moment we told his physical therapist about the situation. Therefore we couldn't do therapy today (no therapist will work with an individual with a known contagious virus). Bummer.

If you've ever had Pink Eye you know how incredibly uncomfortable it is. Itching, swelling, pain, tears, and all that goo constantly running down your cheek - it is awful. Stacey and I talked a bit later about how it is best that Ben cannot rub his eyes very well like the rest of us would. All that does is make the experience more painful and increase the chance others will catch it. It's just another strange blessing that comes with having an exceptional child.

Brilliant Blue: I've already been turned down for the first two shows I've applied for this spring. One would've been in March and the other in April. For the record there are a few others that I've applied to that I no longer have to jury into but all of them occur after mid-April (oops, Savannah the first Saturday in March is the lone exception). Not having anything in a gallery now really sucks with the knowledge that I have one show booked between now and April.

This is the hardest part about my job. I no longer fret about whether I'm good enough to get into certain shows because I'm fairly certain that had I been able to apply early enough, I would've made the cut (I had very nice sale from a new customer back in mid-January). The problem is the ability to present my work to the public during the off-season. The gallery situation was obviously not the right answer so we're now looking at putting my website back up. Let's just say that in the past it was just a museum which became a waste of money to keep running. another bummer.

Cadmium Red: I finally got the bug to paint and paint like mad! I've got a few things finished that I started at the beach or toward the end of the year. The sketch book has also reappeared so some new ideas are developing. Until I get the website up and running you'll occasionally see something new pop up here. Hopefully the weather will cooperate tomorrow so I can photograph some of the new stuff.

Glad to hear you're on a creative surge--that must feel awesome!

We've had one kid with pink-eye this week too! Fortunately for him, we had two snow days so he didn't miss any school. Hope Ben gets over it soon.