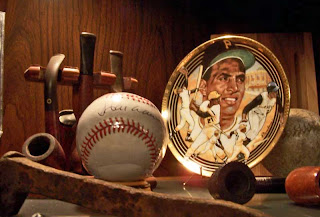 I've heard that song by Chicago for most of my life. Honestly I never related to the song when I first heard it as a teenager. I always liked the line about baseball cards because I collected them at the time. Never in my wildest dreams could I imagine one day relating to the meaning and emotion expressed by those guys some 33 years ago. Ironically I almost cry every time I hear the damn song on the radio now.

The 1970s were my stomping grounds. I grew up, matured, and experienced the change from childhood to teenager to "almost adult" in that decade. The time is now that I understand my father's sadness as he looked back at the fifties. Every now and then I'd catch a moment where he'd drift away to someplace special from the past usually due to a song he'd just heard. I guess I turned out just like him.

My mom & dad were "pretty cool parents" to all our friends while me and my brothers went through our teenage years. My dad even had an old jukebox next to our swimming pool that was filled with rock and roll songs on 45s ranging from Elvis Presley to Kiss. It is/was the time of our lives and we honestly never appreciated it. I do now as one of my own approaches that same difficult time in life.

I heard "Old Days" over the weekend and my mind was swept away to so many things I am forgetting and my memory just barely recalls now. Honestly, at the age of 45, I'm hoping I haven't truly reached my middle life. My hope is that it's about a third or maybe a fourth of the way over. I want to be there for my kid's milestones which my dad missed out on. So just so I have them on record here are some things I really do miss:

The photo is of some favorite things I've collected over the years: baseball signed by Hank Aaron, a limited edition Roberto Clemente plate, an antique softball, a rusty railroad spike taken from a track near my grandparents birthplace in Kentucky, and some antique pipes.

Wow, what beautiful, wonderful memories! Oh, it sounds so great. I think Jim and I drove a rental Nissan 280ZX on our honeymoon. Too bad you sold it ;)
We have an insane asylum on Christmas each year too.

Thanks for sharing. You always make me think.

Awww what a sweet list... sad thing is there are some similiar memories of my own I am already reminiscent of and I am only 27!!! How is Ben doing? Give us an update!
Vickie

#15-is that why the cow died??? Hiding in the river from your bottle rocket wars?

what great memories bennie!
what happens when you eat shrimp and where were you when you realized you had an allergy? how scary!

Thanks for sharing, those are some great memories! It sounds like your dad was a lot of fun.

Ok, if it makes you feel any better, I'm 45 too, and I REFUSE to be old! Of course it doesn't keep me from sighing over the "good old days", just like my dad does. Nothing like 70s music to take me there too.

btw, thanks for the kind words on the paintings - I am so rusty chile!