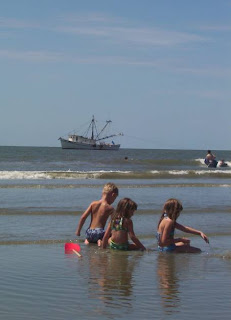 Perhaps that is what I'm "suffering" from? For some reason we're now recovering from the drought of 2007 over a two-week period that began the week before Christmas here in the Southeast. Since Jessie & Ben have been out of school we've had maybe three days of sunshine. The rest of those days we've had steady cold rain that postponed my camping trip this weekend.

Joan and I are convinced we have that ailment called Seasonal Affective Disorder (SAD, appropriately) when the nights are long and the days are way too short. Since the winter solstice occurred a little over a week ago the prospect of facing January and February seems daunting. All we can look forward to is a trip to my mother's beach house sometime in mid-January. Me, my mother, and Ben are staying for a week while Joan and Jessie visit two weekends back-to-back. Hey, sometimes being a full-time artist has its benefits!

I applaud Joan for her hard work and diligence in getting rid of a bunch of crap unused toys and furniture over the weekend. Ben now inhabits three rooms or our home. I have to say that having a much wider open space in what was once our living and dining rooms makes a huge difference. I will soon take you on a tour using my surprise Christmas present given to me by my lovely wife. I'm now the proud owner of the AIPTEK IS-DV2.4 which is a very small digital camcorder and camera made almost specifically for bloggers.

Last night's video of Blaze was taken using my new toy. There are a few more newly filmed exploits but I am banned from using them and not by Blogger. Let us just say that the mixing of wine and a hand-held video device is not a wise idea.

Speaking of Blogger, I think I may have put my foot in my mouth. We may not be moving so soon or even at all. We have a new blog under construction at Wordpress but I'm not really happy with how it works. There's now a good chance we'll be sticking around here for awhile. After all, every one of our business cards have this web address and I really don't want to go through the process of rebuilding our blogroll, notifying BlogHer, and whatever else goes along with the move. Call me lazy.

Anyway, we're dreaming of white sandy beaches, temperatures, in the mid-80s, sun screen, and palm trees here in South Carolina. I truly admire you folks who build snow forts and snow-ski in your neighborhood. Now throw another log on the fire while we're dreaming of a place that serves margaritas as we watch waves crashing on the shore.

I live in Ohio and I would love to be near a sandy beach! I think it's going to be 22 degrees here tomorrow.

Yeah! I get really bummed out (SAD-ish) when we have those overcast, dreary, foggy days. When the sun comes out with snow on the ground it isn't so bad - the brightness helps, even if I am SO ENVIOUS of your 80-degree days!!! Even Sunny Southern California was on in the 60's last week!!! Enjoy!

Happy New Year... from a beach-dweller in Virginia!