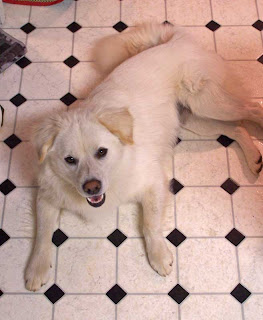 
The song was written by Kris Kristofferson but was more notably performed by the late great Johnny Cash. There have been plenty of Sunday mornings, particularly this past year, when the song not only passes through my thoughts but weighs heavy upon my heart. Being alone on the road after a dismal return on sales at a show and knowing bill payments are falling behind can make you feel like your staring up at Heaven from the bottom of the deepest sea.

No Sunday awakening in recent memory though can even come close to today's. After so much hope and expectation I ended up with the worst sales day in my three years of selling art at shows. I tallied a grand total of $30 after beginning my set up at 6:30 yesterday morning, opening at 9, and then closing at 8PM last night. But the punch to the gut didn't occur until this morning when I called home. I found out that our older dog Baloo, a sweet precious Lab/Spitz mix, drowned in our pool last night.

Even though Baloo was to join me on the road next year for select shows that allow pets, he was Joan and Jessie's love. He had a constant "smile" on his face like the photo above and he tolerated Blaze the little rat dog like he was a kid brother. The tow of them "wrestling in the backyard on a warm sunny day will always be etched in my memory.

Baloo would occasionally crawl up next to Ben and let him pull on his thick mane bringing huge smiles to our son. Every kid that entered our home was his friend. I can't recall the last time he barked but I distinctly remember laughing out loud at his typical vibrato howl when a fire truck's siren passed by the house three days ago.

It is a miserable feeling to feel like a failure at your job. It's even more miserable to suffer the loss of a friend. But the worst thing anyone ever has to do is dry the eyes of your child.

So sorry about Baloo. And...sure hope the payment gets there from September!!

soooo sorry to hear about Baloo - such a sad thing to have happen.
Please give all in the family a hug from us, we feel your pain with you.
Hang in there.
conni