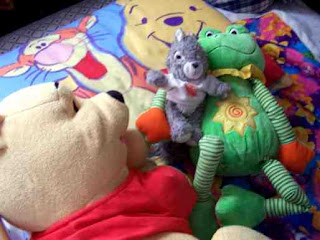 My artist friend Conni and I exchanged e-mails this morning. Conni has not only been an inspiration as an artist but she's also been a terrific advisor/mentor during our ongoing family finances/job woes. Anyway she had some really cool insights about my posts the past two days. She also related that she had no idea that Ben could accomplish some of the things I mentioned.

That got me thinking that I need to tell you folks more about Ben's abilities and some of the neat things we've learned about Ben or ourselves these past seven years. I'll try to remember to make a weekly post in regards to interesting things about Ben and living with him. If I forget then it's your job to remind me!

1. Ben loves watching Sponge-Bob Squarepants. Ben can actually choose which program he wants to watch. As we pass through his favorite channels we'll stop for a few moments long enough for him to get an idea of what's on. When he sees something he likes he'll quickly fling his arms out like he's reaching for the TV.

2. Ben loves Rudolph the Red-nosed Reindeer. Not the song but the 1960s children's program that used claymation. We just discovered this one last night. Although Ben enjoys music we still have no idea about favorites. He can get fired up equally about listening to Kiss, Sesame Street, or Frank Sinatra.

3. Ben can (and will) ask for hugs. This is another quick arm motion in which he folds his arms quickly across his chest. The "sign" looks similar to that guy that airline employer who crosses his sticks to park a jet plane except it's not an overhead motion.

4. Ben can turn book pages. Ben mentioned this one yesterday. This is something Ben can sometimes do with relative ease and at other times will struggle doing it. It just depends on how quickly those brain signals of his are being passed through his body.

5. Ben can select the correct object you ask him to find. Again, see #4. Of course if you've read his post from yesterday Ben can find the correct picture on a book page. We also will put an assortment of colored blocks in front of him and he can identify each color most of the time (it depends if he's interested in doing it or not. Recently Vickie has been getting him to recognize numbers with which she's had some good success.

6. Ben does not like having his picture taken. This is a very strange thing and it's something he also shares with his school buddy, Justin. It has been a rare occasion that we've been able to get Ben to smile for a family photo. Every single photo that you will see hear either Ben was unaware we were taking his picture or he was so wrapped up in the situation that he just didn't care that a camera was nearby. Our suspicion is that Ben (and Justin for that matter) are very self-conscience about their appearance. If that is indeed the case then this would be a remarkable indication of intelligence. By the way, Jessie is the only one and I mean only person on the face of the planet that can get Ben is smile on cue.

7. Ben was born with a cleft palate. In fact that opening in the roof of his mouth was so big that we used to joke that we could see his brain when he smiled. It is indeed why his smile is so infectious. One of our nurse friends has often said Ben was within one more baking day of developing a cleft lip and that's why he came early. You can look back through some of the photos here and see that high arch right smack in the middle of his top gum.

8. Ben was born with 12 fingers. Like the high arched palate this is another anomaly that goes with Tetrasomy 12p. If I had known any better I would've gotten a picture of his extra digits during his NICU stay. The digits were very small (about the size of a baby's fingernail) and contained no bone mass. Both were attached to the outside of each of his pinky fingers. Those things just would not go away. They were removed early in his NICU stay and had to be lanced again before we took him home because they tried to grow back. Now it looks as though he has a wart on each pinky.

9. Ben has a nubbin! We know of one extra nipple that me and Joan agree on. Joan thinks there are two but I think the other one is actually a scar from a surgery. This is also a typical anomaly associated with Tetrasomy 12p.

10. Ben is a HUGE flirt! He's got a thing for young blondes which Vickie, Lisa, and Jenny claim they are going to "fix" one day. I'm not lying! We'll just have to let them chime in here. 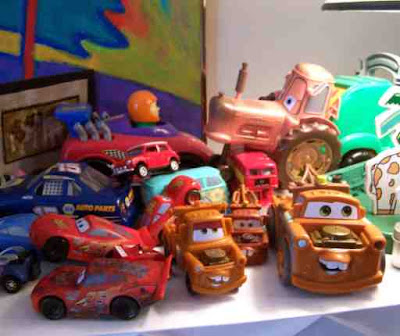 The top photo is of Ben's bed buddies: Pooh, Buster the Central Park Squirrel, and Fast Freddie the Frog. Above is part of Ben's car collection. Anji, we have three "Maters" front right side (the brown tow truck).

Hi Just backreading what I missed at the end of last week and over the weekend... Ben likes Brunettes!!! Like you said, ask Lisa, Jenny, myself, and also ask Grayson, Najee, Joan (mom), Ms. Kristy... see Ben loves all the above and ALL are brunettes. Give it up Bennie, we changed his mind. It's okay to let go...
Ha ha ha
Vickie

Oh and MeMa too! How could I forget Mema?!?!