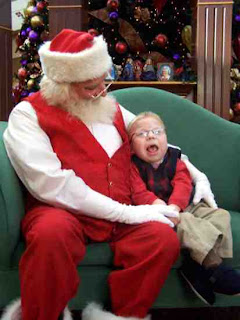 When you have a child like Ben you really have to live in the moment. Hence my comment about having our own Forrest Gump. I'm sure there are some of you that read that and thought I was commenting on Ben's mental abilities or precisely his disabilities. The comment was far from it. If you've not seen the movie in a while then you might want to take another look. Forrest knew his limitations but he also knew what was the best about him. Being a millionaire, or a war hero, or a college athlete meant nothing to him. Being a good son, a good friend, and eventually a good parent was most important to Forrest. I sense the same in Ben.

So without further ado...

9. Ben loves interaction and play with others. This is very important and actually leads to our belief about #10. From Ben's earliest moments in life he craved attention. It has never been like the attention his sister desires. Jessie wants us to acknowledge her accomplishments. "Dad, I made an A on my test today." " I cannot wait until I show Mom my new dance move I learned at class today." "Dad, do you think my drawing is good?"

Those statements and questions are much different from what Ben desires. His requests are very minimal. Ben just wants us to acknowledge he is there. "Please look at me." "If I laugh will you laugh with me?" "If I play this game can we figure out how to play it together?"

That's a huge thing. We have seen so many heart-breaking situations where a special child cannot or more than likely will not acknowledge others. Thankfully it is very rare.

10. Ben is intelligent. Yeah, I'll bet some of you are thinking "wishful thinking." Well I do invite you naysayers to live just a few hours with Ben. Ben chooses which toys he wants to play with. Ben knows which days he goes to school. Ben has practically developed his own language. Ben has figured out how to operate toys that his parents or nurses never knew how to use until Ben showed us. You want me to go on?

This was my greatest fear but has also been my greatest joy. If you've not read about or even seen the Hoyt's story over to your left I suggest clicking on those links after reading this. Ben may never walk but it won't be for a lack of working hard or trying. I've known about Ben's intelligence since the early days of his life. I could see it in his eyes. I know that is a shallow type of reasoning and is far from scientific. But I offer your these observations from past doctors or experts:

+ Ben is blind (he had his annual eye exam today and got his glasses adjusted).
+ Ben is deaf (hmmm...funny how he has responded to his name even during the NICU days)
+ Ben is a vegetable (okay no one ever used that term but we knew exactly what Dr. Morales meant when he finished his exam of ben's MRI).
+ Ben will probably not make it past ________ (seven years and counting!).
+ Ben will never talk (this is another good one - he can out-talk his sister - a really big deal).

I guess that's enough for now. I'm really proud of the little man! Yeah, I get real emotional when I talk about how far Ben has come. There is no doubt that according to logic Ben should neither be alive nor having the great time he's having just being alive.

Again, The Waddells ask the question: isn't that one of those things to be pondering this time of year?