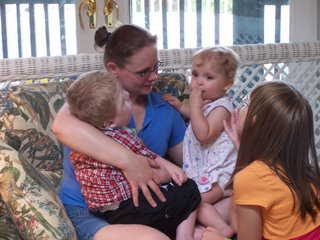 Every so often raising a child with special needs brings about situations that outsiders (those of you with fairly normal existances) can't quite understand. For those families with a child of severe problems one of the first things we have to get used to is having strangers practically living with us. Ben has had almost constant nursing since he arrived home from the NICU in early January 2000.

Mary Brady was Ben's first primary nurse and Ben was Mary's final pediatric patient. In the first six year's of our son's life, Mary went from working all of Ben's weekday hours to finally just working one day a week. Along the way Mary and her husband became part of our family. It naturally happens when someone works and lives their life right there in your own abode.

She was there when our family business was slowly deteriorating away. She saw the pain me and Joan were going through. She saw the worries and grief during the times Ben was hospitalized. She watched Jessie grow from a toddler into a young lady. She was there for all of Ben's wonderful accomplishments during therapies. She shared our journey, the journey that only another family member could appreciate.

It was truly a sad and happy day when she clocked out on our kitchen phone for the last time this past Spring; the day she began enjoying a well-deserved retirement.

And so it is different for us "special families" when folks who were once strangers that pass into and out of our lives. Early last year Vickie Robertson took over as Ben's primary nurse. She and her husband were still getting used to having their first child Haley in their household so she was quite accustomed at having to change diapers, deal with formula, and keeping a constant eye out for subtle changes in a little one's health. We immediately liked her but more important Ben really liked her!

Vickie took charge of Ben's therapies as I began leaving home more often preparing or traveling to art shows. Ben responded to Vickie just as much as he had for me. She challenged him and he liked it. It wasn't long before I began seeing Jessie arrive home from school and shortly after appearing under one of Vickie's arms with Ben under the other reading a book.

I met Daniel, Vickie's husband, for the first time on Christmas Eve last year. It was the first time in Ben's life that one of his caregivers came to see him in the hospital. It meant a great deal to us that they visited that evening.

As the transition began to move Ben into a school setting this year, Vickie gained even more admirers at The Washington Center. That was quite evident when I broke the news to their staff this morning that Vickie had received a promotion with our nursing agency. We knew it was bound to happen because she is a very bright young woman with a great future ahead of her.

So it is with sadness and joy that we will soon say farewell to Vickie as Ben's primary nurse. We are sad that we soon won't get to see her each day but we are happy for her as she continues her journey to accomplish her dreams and goals.

Thanks for this special year, Miss Vickie! Just like Mary, Julie Guy, Cheryl Laport, Beth Teshon, Jackie Holland, Barbara Rhoell, and Jennifer Reece, your "other family" will always here for you.

Well said. She is a gem for sure. We will miss her at the Washington Center.
Kristy